KUALA LUMPUR: The government has made the option available for e-hailing drivers to take the Public Service Vehicle (PSV) course electronically as they work towards getting their PSV licence by July 12.

Transport Minister Anthony Loke said e-hailing operators had been given the green light to offer ePSV courses to their drivers as an alternative to attending the RM200 six-hour course at designated driving schools before sitting for a one-hour test to obtain their licence.

“They can take the electronic course during their free time before sitting for the test. E-hailing operators can conduct the ePSV as long as they follow the ministry’s module,” he said, adding that operators had the option to offer the ePSV course for free.

The ministry had made the effort to simplify the PSV licence application process and would not be extending the deadline, Loke said in response to demands from Grab Drivers Malaysia Association for a six-month extension after members cited difficulties such as problems sitting for the course, high fees and the test’s difficulty level.

He said KTM train ridership had dropped due to the negative perception that the trains were always late.

Loke explained that the service was disrupted by upgrading works under the Klang Valley Double Track project.

“Previously, commuters had to wait about 20 minutes for the train to arrive but the upgrading works have caused trains to come every 45 minutes,” he added.

Loke said commuters could check for real-time information on train arrivals, departures and delays on MyRailtime.

The KTM Komuter Utara, Electric Train Service (ETS) and the Intercity train schedules will be included in the mobile application by September.

MyRailtime is available on Google PlayStore. It will soon be on the iOS App store. 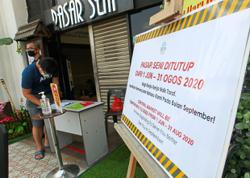 Taxi, e-hailing drivers at a loss