GEORGE TOWN: A cracked underground drain caused rainwater to flood the earth beneath a road in Tanjung Bungah, causing a retaining wall to burst open and creating a 10m-wide “cavern” beneath the road.

Residents along Lembah Permai woke up last Friday and found part of their street had caved in.

An abandoned house on lower grounds next to the street is teetering on the brink of collapse after water washed away the earth beneath the house’s foundation.

Where the opening of the 40cm-in-diameter underground drain used to be is now a maw around 10m across, with chunks of the wall lying down the slope. 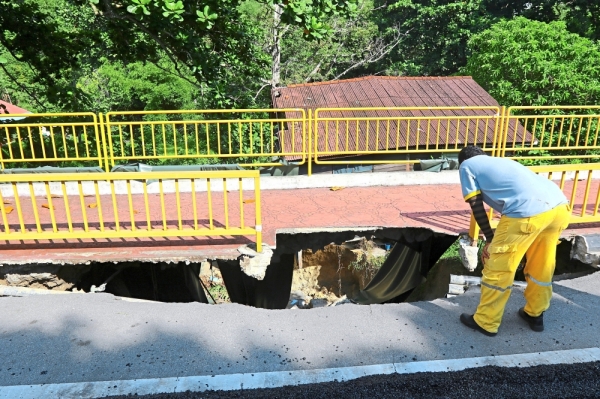 The minor landslide brought back fearful memories for residents because it is less than 1km from the Tanjung Bungah landslide that happened in October 2017, which killed 11 construction workers.

“It was raining so much last week. The water from this drain comes from most of the roadside drains in hillside and it was gushing almost all day and night.

“Luckily, no one lives in that house now. It was abandoned many years ago,” said neighbour Teh Choon Pin.

When the southwest monsoon began on May 6, it was raining almost continuously for five days in Penang and this retaining wall burst open on the fifth day.

Resident Zuhaimi Che Mat, who lives just about 30m from the wall, said it was the first time this has happened in the 50 years she lived there. State Works Committee chairman Zairil Khir Johari, who is also Tanjung Bungah assemblyman, said the state approved an emergency fund of RM220,000 and a contractor has been appointed to start repair works.

“The underground drain had cracked and water was seeping into the soil and weakening the road foundation.

“We knew there were problems and the Public Works Department was in the process of calling for a tender before the wall burst open,” he said.

He said the hassle was that there were many utility cables and pipes running under the road that went down too.

“There is an 11kV electricity cable, water pipes, telephone cables and others. So many agencies will be involved in the repairs,” Zairil added.