Which voters to woo now?

Tsen (white shirt) and on her left Bung Moktar.

SANDAKAN: A double-edged sword hangs over the campaign strategies of the main contenders from DAP and Parti Bersatu Sabah (PBS) in the Sandakan by-election.

The racial composition – 51% Chinese and 45% Muslim bumiputra – in the parliamentary seat in the east coast of Sabah has the two parties in a fix as a game plan could have a positive effect on one community and negative impact on the other.

The Muslim community living in stilt houses and low-cost flats in Pu­lau Berhala and Sim Sim water village are eager for “bossku” Datuk Seri Najib Razak to make an appearance.

They want to take “wefies” with the former prime minister whom they can only see on Facebook and the television.

However, bossku’s appearance could turn off the Chinese living in the suburbs along Jalan Utara like Ban­dar Kim Fung and Taman Fulliwa.

PBS and Sabah Umno are still weighing the pros and cons of a surprise Najib visit.

“Najib might get us the Muslim votes but we might lose the Chinese votes,” said a PBS leader.

Former deputy chief minister and Gerakan vice-president Datuk Ray­mond Tan who hopped to Parti Warisan Sabah, the backbone of the current Sabah government, has angered some diehard supporters of DAP who are not happy with the ka­tak (frog or party-hopping) culture.Tan was also their enemy as DAP contested against the incumbent assemblyman of Tanjung Papat (one of the two state seats in the Sandakan parliamentary consti­tuency) in GE14. 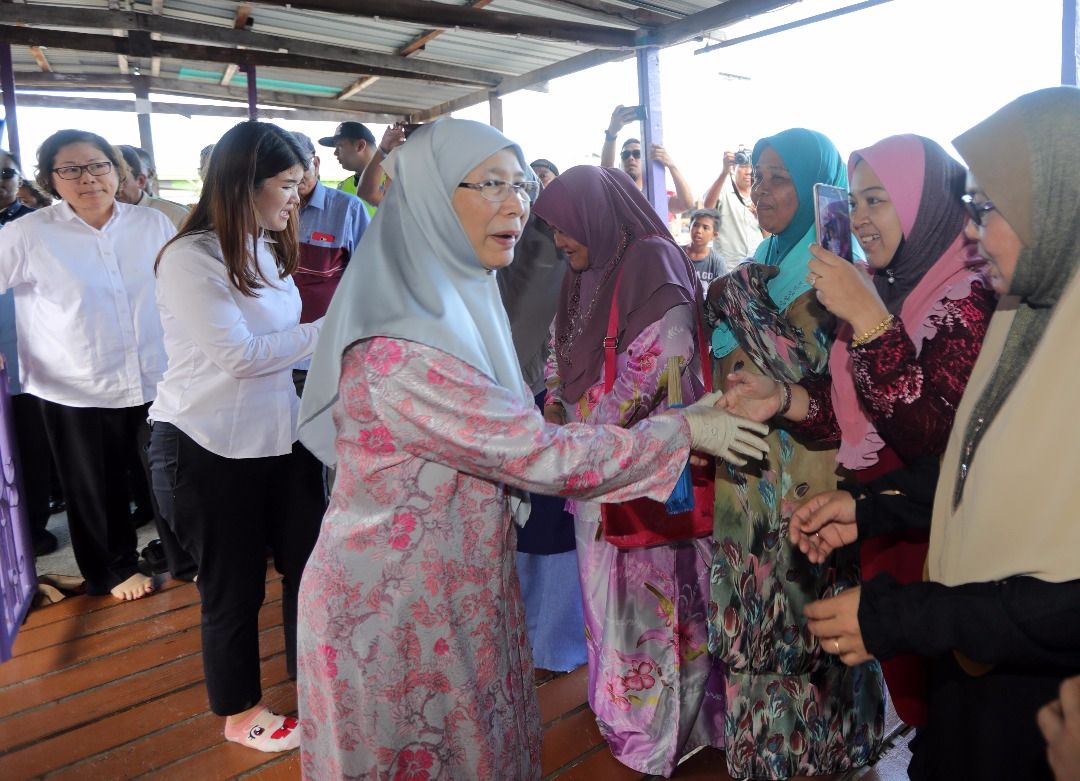 Tan, who contested under the Ba­risan Nasional ticket, lost the Tan­jung Papat seat to Sabah DAP deputy chairman Datuk Frankie Poon, who won by a majority of 5,818 votes.

Warisan thinks that Tan could bring in the Barisan voters to support Vivian Wong, the DAP candidate for Sandakan.

DAP, however, fears that Tan would put off its supporters.

“He might alienate our suppor­ters,” said a DAP politician.

Depending on who you talk to, controversial Sandakan Municipal Council (SMC) president Datuk Pe­ter Hii, who had his 15 minutes of fame when a viral video showed him waving a handful of cash while arguing with an officer from Sabah Electricity Sdn Bhd (SESB), is a plus or minus point.

But ordinary voters like him as he is quick to solve – by repriman­ding civil servants to do their job – the little problems they bring to him.

When Sabah Chief Minister Datuk Seri Mohd Shafie Apdal announced his controversial decision to appoint him as SMC president, Hii quipped: “If I fail to carry out my duties and responsibilities, do not manage to turn Sandakan into a booming town or bring investments to our beloved town, then I am ready to be placed in a shooting range.”

The bulk of the DAP hardcore voters in Sandakan are happy that Sabah Umno chief Datuk Bung Moktar Radin was charged with Felcra corruption.

But the Muslim voters, especially Umno supporters, questioned the timing of his charge.

“Why is he charged during the Sandakan by-election? Why not a few months ago?

“Are they afraid that Bung Moktar can mobilise the Umno supporters to go out and vote on May 11?” a Muslim voter asked on Monday night when the Kina­batangan MP made his first appearance to campaign in Sandakan after he was charged in Kuala Lumpur.

A political analyst said Muslim voters might vote for Datuk Linda Tsen of PBS as a protest against what they see as selective prosecution.PAS has thrown its support be­hind PBS in the Sandakan by-election and Tsen can expect to receive a few hundred votes from the supporters of the Islamist party.

However, DAP is turning it as an issue that PAS – which it equates to being anti-Icerd (International Convention on the Elimination of All Forms of Racial Discrimination) and the Rome Statute – is in bed with PBS.

For PBS, PAS is a negligible issue in the campaign and it is focusing on DAP’s chui niu (Mandarin for lies) on its campaign promises such as lowering oil prices and recogni­sing the Unified Examination Certi­ficate.

The visits of federal ministers like Deputy Prime Minister Datuk Seri Dr Wan Azizah Wan Ismail and Defence Minister Mohamad Sabu to Sandakan show that Wong has the support of the big guns from political parties like PKR and Parti Amanah Negara.

But such support may cut both ways. The VIPs are taking away time from Wong which could be better used to meet the people than playing host to them.

Viral political memes also show Wong “acting subservient” to the federal leaders as she trails behind them during walkabouts.

There is, nonetheless, sympathy for Wong as she is the grieving daughter of Sandakan MP Datuk Stephen Wong who died of a heart attack, triggering this by-election.

But there are those who feel that her candidacy reeks of nepotism.

If the double-edged sword cuts to PBS’ favour, the Sandakan by-election might see an upset.