Doan pens love letter to Malaysia before being freed

KUALA LUMPUR: After spending over two years in jail for the high-profile murder of Kim Jong-nam, Vietnamese Doan Thi Huong’s nightmare ended when she flew back to Hanoi, but not before writing her love letter to Malaysia.

Doan, 30, had written the letter on her last night in the Kajang Women’s Prison, where she had been since her arrest on Feb 15, 2017.

“I’m very happy and thank you a lot. I love you all,” she said in the letter, which was read out by her lead counsel Hisyam Teh Poh Teik to the press at KLIA.

Doan flew back to Hanoi from KLIA yesterday evening.

Local and foreign press had earlier rushed to the airport to catch a glimpse of Doan but failed as she was nowhere to be seen during the press conference at the airport.

It is believed that special arrangements had been made for Doan to board her Vietnam Airlines flight.

A video caught her being transported in a white van to the aircraft on the tarmac where she boarded the plane with a few others as well as with a bright pink suitcase.

Hisyam said Doan’s case involving the estranged half-brother of North Korean leader Kim Jong-un would not be reopened as there was no appeal by the prosecution against her sentence.

“The case has come to a complete end as far as Doan is concerned,” he added.

On April 1, Doan was sentenced to three years and four months in jail by the Shah Alam High Court after she pleaded guilty to an alternative charge under Section 324 of the Penal Code for voluntarily causing hurt by dangerous weapons or means. 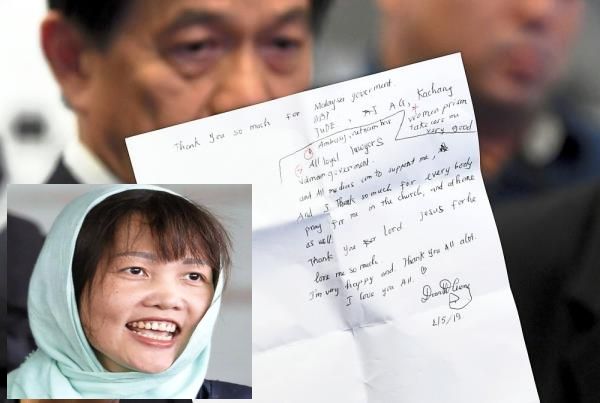 Honest thoughts: The letter written by Doan (inset) being held up by Teh during a press conference in Kuala Lumpur. — Bernama

Her jail time is shortened as she was entitled to a one-third remission on the prison sentence, which ran from the date of her arrest.

According to the alternative charge, Doan and four individuals still at large had caused hurt to Kim Chol, an alias used by Jong-nam when he travelled, by using a dangerous substance known as the VX nerve agent at the departure hall of KLIA2 at 9am on Feb 13, 2017.

The turn of events in the murder trial that had captivated the world’s attention started with the surprise acquittal of Doan’s co-accused in the case, Siti Aisyah, on March 11.

The Indonesian was granted a discharge not amounting to an acquittal after the prosecution withdrew its case against her.

The deputy public prosecutor did not give a reason for the withdrawal except that they had received instructions from the Attorney-General.

The different treatment received by the two women sparked an outcry from the public with some accusing the AG of being unfair, including Bukit Gelugor MP Ramkarpal Singh who urged for Doan’s charge to be dropped.

In an interview with The Star, Siti Aisyah’s lead counsel Gooi Soon Seng said the two cases were factually different despite the women being tried together in one trial, resulting in different outcomes.

“Siti Aisyah and Doan were charged separately and not jointly. There was no common intention between them.

“But they were only jointly tried for purposes of convenience because the witnesses are the same,” he said recently.

Some of the differing facts between Doan and Siti Aisyah included the findings on their nail clippings.

“Doan’s fingernail clippings had traces of VX while Siti Aisyah had none,” he added.

“The most important fact throughout the entire case is that they do not know each other.