Out to help the people: Wong visiting one of the stilt houses during a walkabout at Jambatan 20, Kampung Sim Sim. — ZULAZHAR SHEBLEE/The Star

SANDAKAN: If you take a walk on the walkways in Kampung Sim Sim, you will be able to appreciate the interesting and different designs of stilt houses here.

But you will also notice problems that needed to be fixed.

Like many coastal villages in Sabah, floating garbage in the sea has been a long-standing problem.

Then there is the hazard of ric­kety wooden bridges leading to the houses. 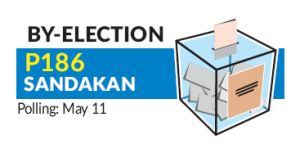 Resident Ahmad Awang Omar, 67, lamented that the government was only interested in beautifying the walkways.

“They do not see the real assistance that we need. They need to listen to the real problems,” he said.

The retired handyman was met at the village’s Jambatan 20 (Bridge 20) yesterday where DAP candidate Vivian Wong was making her campaign rounds.

There are 16 houses on stilt in Jambatan 20 alone.

The village consists of Jambatan 1 to Jambatan 24, where each walkway or jambatan acts as a cluster for the village as it expanded.

It is learnt that a village chief has yet to be appointed.

Kampung Sim Sim is known as the oldest water village settlement in Sandakan with a mainly Muslim bumiputra population.

It sits just outside of Sandakan town and has been the focus of candidates as the village has a large number of voters comprising the Bajau Suluk community.

Ahmad, who has six children who live outside the village, is hopeful that housing repair assistance will be given priority by the elected Member of Parliament.

He admitted that he did not know much about the candidates contesting for the May 11 by-election but said the late Datuk Stephen Wong had visited the village during his time as MP.

Housewife Suraini Syarifuddin, 34, and her husband Suhardi Lati­pu, 36, who recently moved to Jam­batan 20 last year from Jambatan 19, also said the various assistance that they applied for previously, such as lighting for the walkways, have yet to be carried out.

Suhardi hopes that whoever wins will help improve the popular Sim Sim market, where he sells grilled fish.

“The space could do with an ex­­pansion but right now the fans are not working and there is no proper lighting.

“It is also inconvenient for those eating at night,” he said, adding that parking was also an issue.

Wong said she felt positive after the reception she received from the villagers, adding that her posters were also hung up in some houses.

She agreed that the bridges’ safety should be given attention as well as the need to provide fire extin­guishers for the wooden hou­ses.

Meanwhile, independent candidate Sulaiman Abdul Samat, who was met while campaigning at Sri Taman, claimed that past leaders only visited the village for publicity purposes but did not help to rectify the problems.

The village is the only gazetted coastal village under the Sandakan parliamentary constituency.

Amanah will act against members who helped Hamzah