“Importantly, the new alignment will also prioritise cultural, heritage and environmental factors by avoiding the Klang Gates Quartz Ridge in Gombak, Selangor, the longest pure quartz dyke in the world,” he said when announcing the resumption of the ECRL project yesterday. Later at a press conference, Dr Mahathir was asked what the other considerations for the ECRL’s new realignment were, particularly bet­w­een Port Klang and Putrajaya.He noted that one factor was to avoid the need to tunnel through the nation’s mountain ranges.

“Also, the material there is mostly silica, something that we can use for other purposes. So we don’t want to disturb that,” he added.

The new alignment for the ECRL would resolve issues with the Sel­angor government because there would not be a rail link between Gombak and Port Klang.

The state government had objected to the ECRL because the link from the integrated hub to Port Klang would cut across the 16km­­-long Klang Gates Quartz Ridge.

The area has five endemic plant species among 265 species found nowhere else in the world, including the rare serow.

The Selangor government has been lobbying for the ridge to be declared a natural heritage site.

On Sept 16, 2018, Deputy Tourism, Arts and Culture Minister Muham­mad Bakhtiar Wan Chik was reported to have said that the Klang Gates Quartz Ridge was one of four sites earmarked for application to the Unesco Heritage list.

If the rail project were to cut through the ridge, it would damage the environment and jeopardise its chances with Unesco. 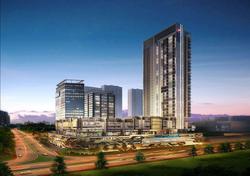