SEREMBAN: It's a clear day in Rantau on Saturday (April 13) as 20,804 voters exercise their constitutional right to pick their assemblyman.

Malarvizhi, a housewife, was the earliest to arrive at SJKC Chung Hua where she will cast her ballot.

She arrived as early as 6.40am and was the first to enter when the gates opened at 7.30am.

This is the first time Malarvizhi is voting in Malaysia since her return in 2016 as she has been away in Canada for 25 years. She is the only one in her family registered as a voter in Rantau as she was "somehow" moved out of the Port Dickson constituency under the last redelineation exercise by the Election Commission.

Mohamad, who has been the Rantau assemblyman since 2004, is also scheduled to vote here at 8.30am.

Dr Streram will vote at SJKT Rantau while former lecturer Mohd Nor cannot vote as he is not registered in the constituency.

The EC has also provided buggies to ferry older voters to their polling streams. In total, nine units have been deployed for use in this by-election.

In GE14, Mohamad was declared the winner of the seat after Dr Streram was prohibited from entering the nomination centre to submit his nomination papers.

He was stopped for not having a pass issued by the EC.

Election Court judge Azimah Omar allowed Dr Streram's petition for a by-election on the grounds that Mohamad's election victory was not valid.

The Rantau polls is the seventh by-election post-GE14, and the third to be held in 2019 after Cameron Highlands and Semenyih.

7.50pm: (UNOFFICIAL) All votes have been counted, BN incumbent Datuk Seri Mohamad Hasan wins by a 4,561 majority, polling 10,257 votes against Pakatan's Dr Streram, who garnered 5,886 votes. Independents R. Malarvizhi and Mohd Nor Yassin have 82 and 80 votes, respectively. A total of 16, 495 votes were counted and there were 139 votes.

7.30pm: Hundreds of Barisan Nasional supporters have gathered outside the main tallying centre as word spread that Mohamad has unofficially won.

7.20pm: (UNOFFICIAL) BN incumbent Datuk Seri Mohamad Hasan is the winner of the Rantau by-election with almost two-thirds of votes counted. He has 9,535 votes ahead of Pakatan's Dr S. Streram, who currently has 5,176 votes. Independents R. Malarvizhi and Mohd Nor Yassin have 77 and 70 votes, respectively.

7.00pm: (UNOFFICIAL) Datuk Seri Mohamad Hasan has won five of 14 polling districts including Kg Sendayan, Kg Mambau, Kg Bemban, Kg Sri Lallang and Kg Sega. He is leading in all eight other polling districts, except in Bandar Ekar where he is trailing Pakatan's Dr Streram by 168 votes. Mohamad has now polled 7,631 votes against Dr Streram's 3,771. Mohd Yassin has 54 and Malar 52.

5.45pm: Election Commission is streaming the vote-counting process live on its Facebook page. 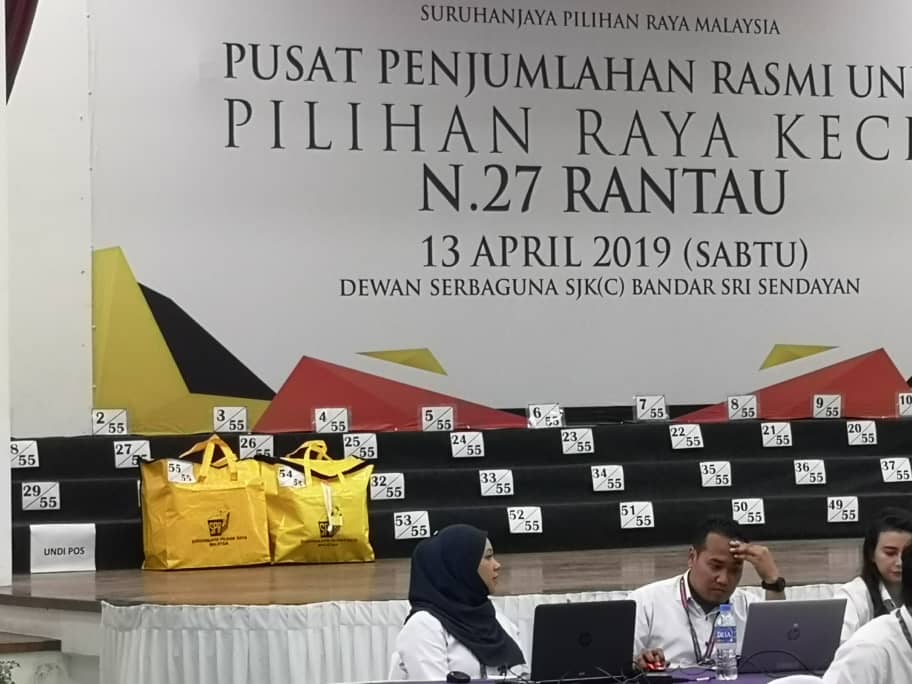 5.40pm. The first two bags of ballot papers have arrived at the official tallying centre in SJKC Bandar Sri Sendayan.

5.30pm: A Tenaga Nasional main generator unit has been brought into the counting centre. 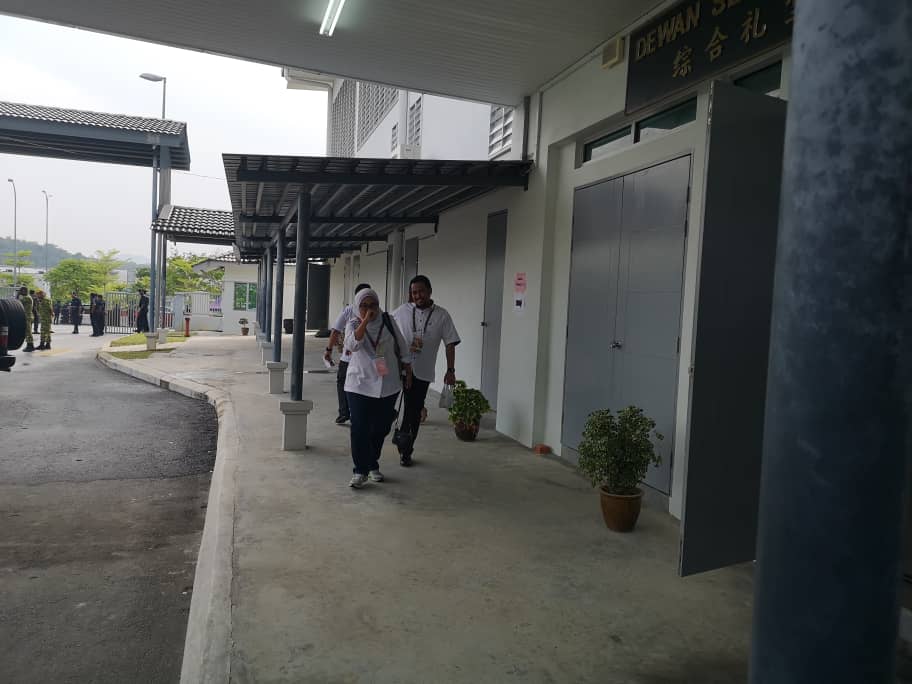 4.00pm: With one-and-a-half hours till polling stations close, voter turnout for the Rantau by-election has reached 74%.

3.40pm: Electoral observers received complaints that people were loitering outside polling stations and taking notes of serial numbers to identify voters who have voted and trying to reach out to those who haven't.

Bersih 2.0 chairman Thomas Fann said this is an offence under Section 5 of Electoral Offences Act on maintaining secrecy of votes.

2.40pm: After a blistering afternoon, the heavens open up and it's raining in parts of Rantau.

2pm: Negri Sembilan Mentri Besar Datuk Aminuddin Harun has appealed to voters to come out to cast their ballots as only 55% had done so as of 1pm.

Aminuddin, who is also Pakatan Harapan's election director for Rantau, says a higher turnout is necessary for a Pakatan upset.

1.40pm: As of 1pm, 55% of voters have cast their ballots at polling stations throughout Rantau.

"Thanks to our earlier feedbacks, we see changes now. They don't have to wait under the sun. I noticed that there were chairs prepared, quite comfortable. "Congrats to EC as they have taken our feedbacks into consideration. We see improvement," he added.

12.40pm: As of noon, almost half of the registered voters in Rantau, or 47% have cast their ballots. 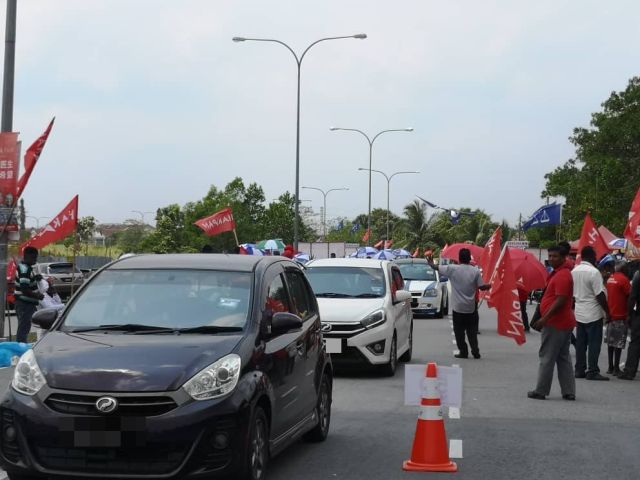 12.10pm: Pakatan and Barisan supporters are seen along the road waving party flags, 50m away from the SJK (T) Rantau polling station. An Election Commission officer here said there are five voting streams in the polling station with 2,158 registered voters here.

11.20am: Abdul Halim Hapis and wife Khatijah Abu Samah, who are individuals living with dwarfism, also made it a point to vote this morning. The couple, both aged 43, were happy that the process was quick.

Khatijah, a teacher who was raised here but has since moved to Selangor, decided to come back to vote to continue with her streak of having voted in every election.

Abdul, who works in a private company, is also a registered voter here. 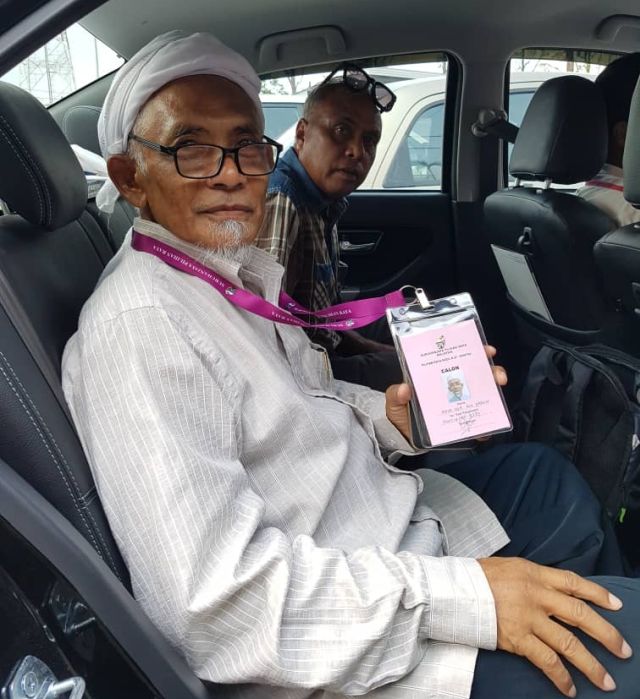 11.05am: Independent candidate Mohd Nor Yassin arrives at the SJKC Chung Hua polling centre in a Perodua Bezza. Mohd Nor said this was the eight centre he has visited since morning.

The retired lecturer is not voting as he is registered in Gemencheh. Asked if he was confident of a victory, Mohd Nor said he was.

"The turnout looks good too. I am confident... the rest is in Allah's hands," he added.

10.15am: A shouting match between Barisan Nasional and Pakatan Harapan supporters just outside SJKC Chung Hua almost turns ugly with both sides trading barbs. Timely intervention by local party members prevents the crowd from getting physical.

10.15am: Voter Nur Erina Jamaluddin, 25, who just gave birth to a baby boy two days ago, came to cast her vote at SJKC Chung Hua.

"Although I am still in confinement, I had to come to vote for Tok Mat. Now my husband and I can decide on our baby's name," said Nur Erina from Kg Tanjung near here. 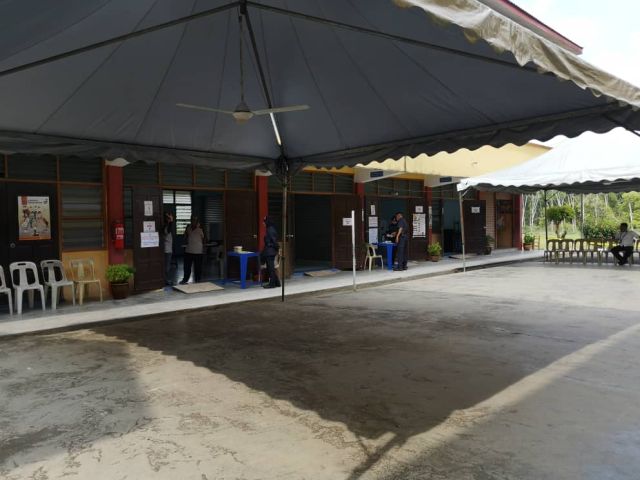 10.12am: No queues at all five voting streams (saluran) in SJK (T) Rantau polling station. A voter in SJK (T) Rantau said he did not have to queue to cast his vote. He said many friends working out of town did not come back to vote.

"No need to wait. I went in straight to vote. Huge difference as compared to GE14 where there was a large crowd," he said.

9.30am: Pakatan's Dr Streram said a clip in which he referred his two daughters as "anak manusia" and his two cats as "anak bulu-bulu" was merely meant to be light-hearted.

"People always say I have a very serious face just because I am a doctor. The clip was to share my funny side... like a comedy," he said.

9.25am: Pakatan Harapan candidate Dr S Streram, who visited the polling centre at SJKC Chung Hua, was upset when he saw a group allegedly comprising Barisan Nasional supporters at the main gate at SJKC Chung Hua. He said it was an offence for them to be there as the election laws clearly stipulate that they should be 50m away from a polling station. However, the group later said they were members of an NGO called Malaysia Segar and were merely helping the older voters to sit in wheelchairs to get into the centre.

9.20am: Wanita MCA chief Datuk Heng Seai Kie was also present at SJKC Chung Hua to assist the Barisan Nasional machinery. She said MCA's party machinery will work hard to get the voters to cast their ballots.

9.15am: Mohamad's wife Raja Datin Seri Salbiah said she was up as early as 5am and prepared a light breakfast for the family.

"I then performed solat subuh and began our preparations to go out and vote," she said when met at SJKC Chung Hua polling centre. 9.10am: Datuk Seri Mohamad Hasan, accompanied by his wife and children, leaves the polling centre after voting. He commended the Election Commission for making improvements to the polling process where voters did not have to wait long to cast their ballots.

He said the support he received during the 14-day campaign period was good and hoped these would be translated into votes today. 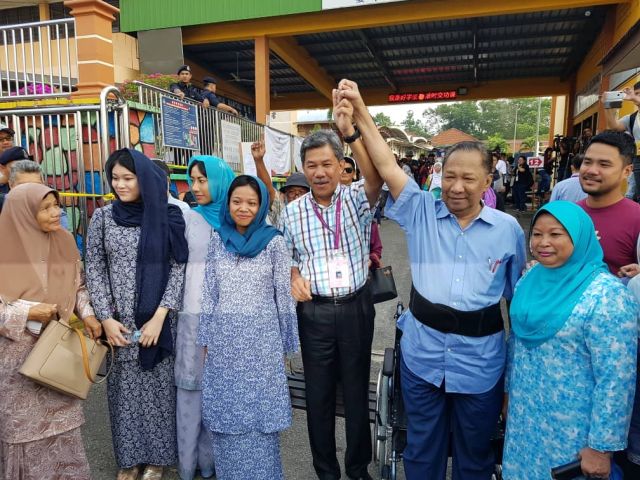 8.10am: Malarvizhi leaves the polling centre at SJKC Chung Hua after casting her ballot. She decided to vote early as she plans to visit the other 13 centres.

This is the first time Malarvizhi is voting in Malaysia since her return in 2016 as she has been away in Canada for 25 years.