KUALA LUMPUR: The role of appointing the new Johor Mentri Besar lies with the party that won the election and not the Sultan of Johor because Malaysia practises constitutional and not absolute monarchy, says Tun Dr Mahathir Mohamad.

The Prime Minister said while Johor may have its own state constitution, it had agreed to be part of the country’s administrative system.

“This is because the rakyat had chosen the party that has the right to pick the MB – and if the rakyat’s right is denied, we are no longer a democracy.

“We will become a country that practises absolute monarchy,” he said.

When pressed if it was the Johor Sultan who would be appointing the mentri besar or acting mentri besar, Dr Mahathir said: “This is a political decision.

“The Sultan has got no role. The role is for the party that won the election to determine who leads.” 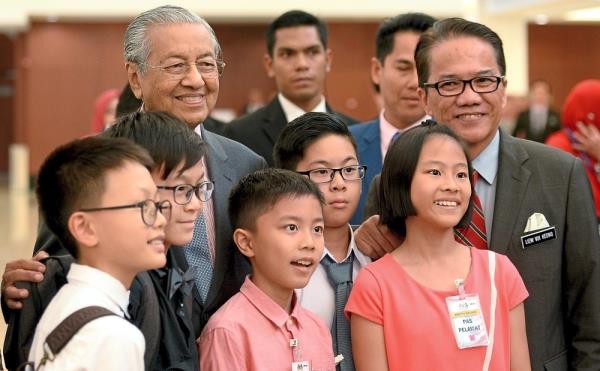 One for the album: Dr Mahathir with Minister in the Prime Minister’s Department Datuk VK Liew posing for a photo with children at Parliament.

however, he added that it would take some time to appoint an acting mentri besar of Johor.

“We will try to appoint one as soon as possible. We have a few candidates we have to trace; very quickly, we will find him,” he

Dr Mahathir also said he did not confirm if Johor exco member Dr Sahruddin Jamal from Parti Pribumi Bersatu Malaysia was one of the candidates in the running for the post.

Dr Sahruddin, the state Health, Environment and Agriculture Committee chairman, is widely regarded as the front runner but it is understood that the other Pakatan Harapan parties have also nominated their assemblymen for the top post.

Parti Amanah Negara has submitted two names while DAP and PKR have each nominated one.