By YIMIE YONG and Clarissa Chung

PETALING JAYA: Degree holders are facing a double whammy as they stare at shrinking starting salaries coupled with a declining demand for high-skilled jobs.

Bank Negara, in its Annual Report 2018, revealed that real monthly salaries for fresh graduates holding a diploma or degree have dipped since 2010.

Those with a Master’s degree saw an even greater decline in their starting pay.

The report, however, noted that the minimum wage has supported increases in the salaries of lower-skilled workers in recent years.

It showed that the real starting salaries of PMR and SPM-educated employees have risen by 4.6% and 2.3% respectively.

Such data is a cause for concern among young graduates.

The cost of education keeps rising but the starting salaries of those with a diploma or tertiary qualification have not kept pace.

Even as the starting salaries of degree holders are diminishing in real amount, the study found that the rate of people being hired in high-skilled jobs is also declining. 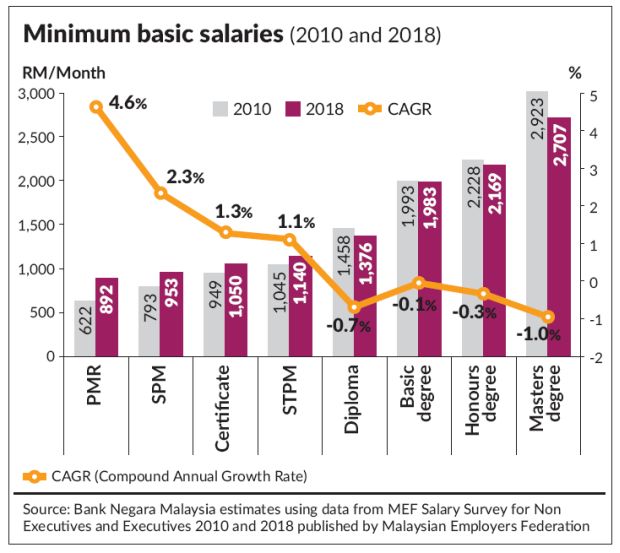 The report showed that the number of diploma and degree holders entering the job market increased by 173,457 people per year (from 2010-2017) on average.

However, in the same time period, net employment gains in high-skilled jobs stand at only about 98,514 people on average per annum.

“This suggests that the economy has not created sufficient high-skilled jobs to absorb the number of graduates entering the labour force.

“In addition, a study by Khazanah Research Institute also found that 95% of young workers in unskilled jobs and 50% of those in low-skilled manual jobs are over-qualified for these occupations,” said Bank Negara in its report.

Wages are forecast to rise by around 6% this year in Malaysia and the growth rate is below the long-term trend.

Bank Negara also found that Malaysian workers are paid less than workers from developed countries when benchmarked for the same level of productivity.

For each US$1,000 worth of output, a Malaysian worker is paid US$340 compared with US$510 in developed countries for the same amount of output.

“Further analysis reveals that most industries in Malaysia compensate workers less than those in the benchmark economies, even after adjusting for productivity.

“This is particularly evident in the wholesale and retail trade, food and beverage and accommodation industries that make up 19% of economic activity and 27% of total employment in Malaysia. These industries are generally more labour-intensive, and dependent on low-skilled workers,” said Bank Negara.

The dynamics of the labour market is also changing as the growing sharing economy, advent of technology and increasing demand for flexible working arrangements are transforming the intrinsic nature of Malaysia’s labour market, said Bank Negara.

Economics professor Datuk Dr Amir Hussin Baharuddin said the decline in the starting salaries of degree holders could be attributed to the mismatch between degree holders and available jobs.

“Some of the degree holders have to go for lower-paying jobs, or else not have one.

“We have not created enough jobs for graduates to be choosy,” he said.

Malaysian Trades Union Congress secretary-general J. Solomon said the report showed that Malaysian workers, except for senior executives, are still not being given their due.

“Wage levels are being artificially depressed by employers, and the government mechanism is too weak and unwilling to address this issue,” he said.

He said there has been a growing wealth and income divide in the country, and this must be addressed by the private and public sectors.

He added that although employees with a PMR and SPM education have seen an increase in their starting salaries over the years, they were still below the minimum wage.