Sibu OCPD Asst Comm Stanley Jonathan Ringgit said the 46-year-old, who is a coffee shop attendant, was arrested shortly after the alleged incident.

The victim was sent to hospital in critical condition due to massive loss of blood after being stabbed in the private parts.

After treatment, the 34-year old victim, a cleaner at the council market here, was reported to be in stable condition.

ACP Stanley said prior to the incident at about 9pm on Sunday (March 24), the man, 28, who is an assistant lorry driver, had agreed to invite his girlfriend (the victim) to their rented room in Jalan Lajong here for a discussion on their three-way relationship, provided the suspect would not cause any trouble.

“The suspect promised not to do anything. When the victim arrived at their place, the three of them were happily chatting.

“The man had some alcohol while the two women only had soft drinks.

After the man had sex with the suspect, she told him that she was going to the toilet to ease herself.

“The man continued having sex with the victim when the suspect came into the room with a knife and stabbed the victim, causing her to scream,” he said.

ACP Stanley said the man rushed out and told his brother, who rents another room in the house, to chase after the suspect.

She was later caught and handed over to the police.

ACP Stanley said the couple were married under local adat (traditions) and have been together for seven years.

The man's girlfriend is married with four children. Her husband is working in a logging camp in Solomon.

The case, ACP Stanley said, is being investigated under Section 326 of the Penal Code for voluntarily causing grievous hurt with a dangerous weapon. 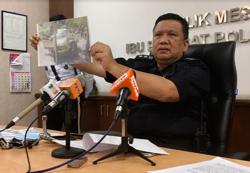