GEORGE TOWN: The Malaysian teenager who went missing after the Christchurch mosque massacre has been confirmed dead.

In a statement on Thursday (March 21) the Foreign Ministry said; "The Government of Malaysia conveys its heartfelt condolences to the family of Allahyarham Muhammad Haziq bin Mohd Tarmizi. The High Commission of Malaysia will render its assistance to the family in the burial process.

"Datuk Seri Dr Mujahid bin Yusof Rawa, Minister at the Prime Minister's Department will also be flying to Christchurch to represent the government in giving support to the Malaysians affected by this tragic incident.

"The Ministry would like to seek the understanding of the media and the public to respect the feelings of the family members during this difficult period," said Wisma Putra in a press statement released today (March 21),

The 17-year-old's father, Mohd Tarmizi Shuib, is one of the three Malaysians who were injured.

The other two injured Malaysians are Muhammad Nazril Hisham Omar and Rahimi Ahmad.

It was earlier reported that Mohd Tarmizi, who was shot in the back had had all bullet fragments taken out and was now in stable condition, alert and able to talk.

The Penang state government had deployed Phee and Bayan Lepas assemblyman Azrul Mahathir Aziz to accompany Rahimi's mother and brother to New Zealand and to render any help necessary.

Both of them returned to Penang on Wednesday (March 20) night.

Phee said he was with Mohd Haziq's mother on Tuesday night.

Wisma Putra officials will continue to hold a series of meetings in Christchurch to help survivors and family members of the injured three victims, namely Mohd Tarmizi, Rahimi, and Muhammad Nazril.

The attack on the two mosques in Christchurch claimed 51 lives and left dozens more injured.

Calling it the "darkest day" in New Zealand's history, Prime Minister Jacinda Ardern said her Cabinet has made, in principle, decisions around the reform of gun laws following the terrorist attack. Further details will come after the Cabinet's next meeting on March 25.

Muhammad Haziq is expected to be laid to rest at the Memorial Park Cemetery in Bromley after Zohor prayers in the afternoon Thursday. 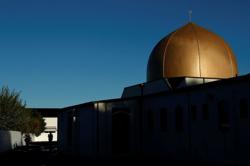