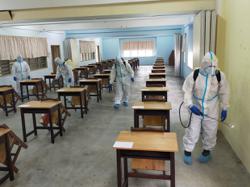 Words of assurance: Dzulkefly speaking to victims at the Pasir Gudang stadium. — Bernama

Its Johor department director Datuk Yahaya Madis said while most of these gases were harmless, some – such as hydrogen cyanide – could be harmful if found in high concentration or if a person was exposed to it for too long.

“So far, the highest reading of hydrogen cyanide we have seen was 4.5ppm (parts per million) on March 13 at Taman Tanjung Puteri Resort.

“However, the reading returned to normal after less than two hours and did not spread to other areas,” he said, adding that currently the air quality around Pasir Gudang had improved since Friday.

Chemicals, believed to contain heavy metal used to dissolve metal at a scrapyard and a chemical factory in Kulai, were discharged into the river about a week ago, leading to hundreds of people being treated for exposure to hazardous fumes.

Since then, there have been three waves of air pollution as the chemicals washed downstream towards the Straits of Johor.

Yahaya said currently, based on their tests, the concentration of hydrogen cyanide was at a safe level of 3ppm and below around the area.“While it is below the risky threshold, we still need to be alert as the readings can change according to the wind and weather.

“We are taking air readings from time to time to ensure clean-up does not deteriorate the air quality,” he said in a press conference at the Pasir Gudang Indoor Stadium here yesterday.

“In one of the messages being circulated on WhatsApp, the culprit claimed a 14-year-old had died due to the toxic fumes, which is not true.

“Another Facebook post claimed Kota Masai was unsafe and the public was urged to evacuate the area,” he said.

He pointed out that some of the original posts had been removed but the fake news had already gone viral.

Health Minister Datuk Seri Dr Dzulkefly Ahmad said the toxic fumes is a one-off “acute exposure” (short-term) and it was not expected to cause long-term chronic effects.He pointed out that the level of toxicity was low and would not kill those who had been exposed to it.

“I’d like to emphasise that what we are witnessing here is an acute exposure where the dose is not fatal,” he said here yesterday.

Asked if villagers and residents staying near the river should be evacuated during the clean-up operation, he said that it was not the ministry’s jurisdiction to give such an instruction.

“The agencies did find hydrogen cyanide but it is at a very low level, which is at 5ppm.

“We will wait and see if there is such a need but at the moment, the clean-up operation will continue. It is already reaching almost 1km (stretch),” he said.