IPOH: Six lives were lost in an early morning fire at the fourth floor of an entertainment outlet here.

All of them, aged between 19 and 37, died of smoke inhalation in the tragedy at De Nest outlet in Jalan Raja Dr Nazrin Shah.

Another victim is a Bangladeshi man Johirul Islam, 26.

Several women, believed to be foreigners, were seen crying at the scene when some of the bodies were brought out of the building.

When met at the mortuary, a friend of Lau said he had earlier received a WeChat message from the latter saying the place had caught fire.

“However he did not ask for any help in the message. The next thing I heard was that there were victims trapped in the building,” said the friend who did not want to be named. Tai’s younger brother Chee Wah, 36, said he was supposed to have breakfast with his brother that morning.

“The last time my brother had a gathering with the whole family was during Chinese New Year,” he said, adding that his brother was friends with Lau.

Perak Fire and Rescue Depart­ment acting director Sayani Saidon said a distress call was received at 5.49am. The firemen were told that 10 victims were trapped in the building when they arrived at the scene 10 minutes later.

Sayani said eight victims, who had run up to the fifth floor for safety, were rescued using a skylift.

“From the eight, two suffered severe breathing problems and were sent to the Raja Permaisuri Bainun Hospital,” she said.

“We checked the 15 rooms; found another body inside one of the rooms and three other inside a toilet,” she said, adding that all the victims were trying to save themselves.

The cause of the fire is still being investigated. All the bodies have been sent to the hospital for a post mortem. Family member of the deceased broke down after hearing the bad news.

Sayani added that the entertainment outlet building was originally designed as an office block.

The original plans in the Fire and Rescue Department’s records showed the eight-storey building was for office use.

“I need to check if new plans were submitted by the owner to change the use of the building to an entertainment outlet,” she added.

Ipoh deputy OCPD Supt Mohd Nordin Abdullah said the police would investigate on why the outlet was operating until the wee hours of the morning.

“However we are not sure whether the outlet was still operating at that time, or the staff were clearing up the place. We are trying to locate the owner of the outlet,” he added. 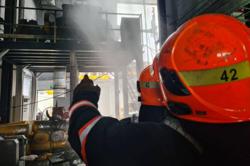