‘Join us in creating a kinder M’sia’

KUALA LUMPUR: Students of the #StandTogether campaign have called on “the adults” to join them in creating a kinder Malaysia by observing National Kindness Week on the first week of April.

The #StandTogether 2019 campaign, initia­ted by R.AGE and property developer SP Setia, was launched yesterday at Setia International Centre, with students hosting the event and issuing their clarion call for more kindness among Malaysians.

“We need the support of adults because some people may not take us seriously,” said SK Kota Dalam student Aqilah Qistina, 12.

“Adults should also be good role models because everything they do will be replicated by their children, so they themselves need to be kinder.”

During last year’s inaugural National Kindness Week, students started advocating for a “Kindness Revolution” by organising projects throughout the country. Thirty of the projects were funded by the #StandTogether campaign.

“Some parents take their stress out on their kids, and their kids learn from their bad behaviour.

“So I hope adults learn from this campaign too,” said SMK Cochrane student Mukuntha Kimaraguru, 17.

This year, the #StandTogether campaign has received another boost as the Education Ministry is supporting the campaign.

“So many kids are being tortured by verbal attacks in school.”

“This year’s #StandTogether theme is fantastic. There’s been too much hatred online. We’re using our platform to rouse the huma­nity in Malaysians,” he said.

“The rhetoric we’re hearing on social media now is getting so toxic. That’s why The Star has been standing up for moderation, and now we want to empower the next generation so they won’t make the same mistakes as us,” said Wong.

The campaign will be supported by programme partners Digi, International Medical University and Unicef Malaysia which will be collectively organising kindness-related workshops for teachers and students in every state.

Other supporting organisations include Teach For Malaysia, Study Hub Asia and 100% Project.

A line-up of celebrity ambassadors was also introduced at the launch. They included returning ambassadors like Lisa Surihani, Arwind Kumar, Jinnyboy and Harith Iskander, as well as new ones like Chef Wan, Nik Qistina and Airliftz.

Rapper Airliftz was born with a nose which was missing its cartilage, and was bullied because of it.

“It still does affect me, but kids nowadays don’t have to go through the same thing I did. There’s a platform that can help, and it’s called #StandTogether,” he said.

Malaysians can sign up to participate in the #StandTogether National Kindness Week through a special WhatsApp chat bot.

The activities include a Kindness Project competition for students, a five-day Kindness Challenge for members of the public, and expert-recommended Kindness Activities for teachers and principals.

For more information, go to www.standtogether.my. 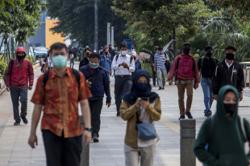