V.K. Lingam fails to set aside contempt of court conviction 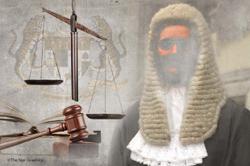 PUTRAJAYA (Bernama): Former lawyer Datuk V.K. Lingam failed in his bid to set aside his six-month jail sentence and conviction for contempt of court.

He also said Order 32 of the Rules of Court 2012 which Lingam applied to set aside his conviction and jail term  was not applicable as that provision applied only to proceedings in chambers.

Lingam, 67, sought a review against his conviction and custodial sentence under Rule 137 of the Rules of the Federal Court and also applied for him to be discharged by the court from contempt charges under Order 32 of the Rules of Court, 2012.

In November 2017, in Lingam's absence, a Federal Court five-man panel led by Federal Court judge Tan Sri Abu Samah Nordin (now retired) found him guilty of contempt of court for accusing a federal court judge of plagiarism in a written judgment and sentenced him to six months jail.

Lawyer R. Thayalan submitted that the Federal Court's decision to convict Lingam was vitiated by bias.

He said as some of the judges who presided on the Federal Court panel should not adjudicate in the contempt proceedings against Lingam as they had sat on an earlier panel hearing a similar matter involving Kian Joo Can Factory Bhd (KJCF) majority and minority shareholders.

He said Lingam never avoided attending court, but could not come because of his medical condition which had prevented him from travelling back to Malaysia.

Senior federal counsel Alice Loke Yee Ching countered, saying that Lingam left the country in 2013 and had not returned, adding that there were numerous postponements of the court proceedings and Lingam tendered medical certificates saying he was unfit to travel.

Lingam, former Kian Joo Can Factory Bhd (KJCF) group managing director Datuk See Teow Chuan and 23 others were cited for contempt of court five years ago, for claiming that a Federal Court judge had plagiarised his judgment in a commercial case related to KJCF.

In November 2016, the Federal Court imposed a fine totalling RM2.15mil on a lawyer, A.S. Thisinayagam, 12 majority and eight minority shareholders of the company for contempt of court.

Two other minority shareholders of KJFC were also fined RM100,000 each for contempt on Sept 26 last year. - Bernama