PEKAN NENAS: Four local employment agents, two of whom are women, were fined a total of RM177,500 by the Sessions court for housing 32 illegal foreign workers in a foreign workers' enclave at the Tebrau industrial estate here.

All four agents, from various foreign workers employment companies, pleaded guilty to committing the offence on Aug 31 at about 12.10am.

The four, who were unrepresented, duly paid the fines.

The illegals comprising Indians, Indonesians, Pakistanis and Bangladeshis were employed in an electronics factory in the area.

Meanwhile in another unrelated case at the special court at the Immigration detention centre here, Zahilah fined a 35-year-old hairdresser from Mersing RM10,000 for employing an Indian national without a valid work permit at her premises in Mersing on Nov 22. 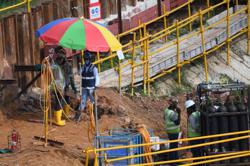