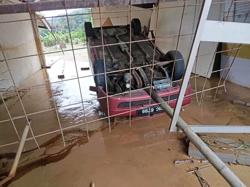 The downpour, which lasted for two hours started at 1pm.

Among the affected areas were Balik Pulau and Teluk Kumbar on the island, while on the mainland were Prai, Butterworth, Taman Inderawasih, Jalan Perusahaan, Kampung Padang Lalang, Bandar Perda and Butterworth-Kulim Expressway.

The flash floods also caused 46 people to be evacuated to relief centres.

They comprise 12 people from three houses in Titi Teras and Balik Pulau as well as 34 residents from eight houses in Padang Lalang in Bukit Mertajam.

However, the floodwaters in some areas have begun to recede especially on the mainland.

"Some 20 pupils were trapped when the main road leading to SK Seri Bayu and Kampung Paya was inundated in floodwaters and the schools had to be closed.

"They were moved out with the help of the Civil Defence Force and the police. They were sent home on four-wheel drive vehicles,” he said.

“Before this (floods) always occur... so on seeing the water rising, we immediately transfer the valuable items to a higher and safer place,” he said. - Bernama

EMCO at two localities in Pahang from Tuesday (Sept 28)
Penang cops nab trio to assist in murder probe
Teachers who refuse Covid-19 vaccines may be transferred, says Education Minister
Focus on business-friendly policies and not bumiputra equity requirement, Finance Ministry urged
Govt to announce terms and conditions for Tabung Haji RCI soon
Boy dies after tree falls on him while swimming at Sg Serendah
Socso paid RM11.19mil in compensation to those infected with Covid-19 at workplaces
Kudat MMEA seizes fish bombs in sampan near Pulau Banggi
MMEA: Over 100 vessels detained for illegal anchoring in Johor waters since January this year
Melaka Zoo set to reopen after 10-month closure