The Sabah Chief Minister and Parti Warisan Sabah president acknowledged that his fellow party members had raised concerns regarding the proposed Kaiduan Dam, and how it will affect the constituency of Penampang.

"It is not Kaiduan Dam. The new dam will be in Papar and managed by the Papar district council," he told reporters after launching the state-level Bulan Kebangsaan celebrations at the Penampang district council near here on Monday (Aug 6).

"I have already discussed this with them, and that was why it was decided that the dam will not be built in Penampang," Shafie added.

The state Finance Minister said that it was crucial to build a dam in Kampung Bisuang as there would not be enough water supply to accommodate the growth in the west coast if necessary measures were not taken now.

He stressed that the Government will not wait until the shortage hits 15% of the water reserves to act.

"We need a dam. We believe within five to 10 years' time, there will not be ample water supply.

"It's not going to be good for everyone (when that happens), not only for those in Penampang and Papar," Shafie said, adding that the Government will engage with stakeholders in Papar, including villagers, before proceeding with the project.

Leiking, who is Warisan deputy president, assured that the Government will have active interactions with the stakeholders and will not rush the project.

The Minister of International Trade and Industry said that he has been actively wooing potential investors for Sabah since his swearing-in last month.

"The same complaints about water and electricity problems in Sabah have been getting back to me. The investors won't dare to come until we solve our water supply and electric outage problems.

"That is a more serious problem now," Leiking told reporters at the same event.

PBS secretary-general Datuk Johnny Mositun claimed that Warisan has gone back on its promise to scrap the Kaiduan Dam project, and renamed it to Papar Dam instead.

Previously, former Deputy Chief Minister Tan Sri Joseph Pairin Kitingan said studies showed that Sabah will not have enough clean water by 2022, and the proposed Kaiduan Dam would be able to sustain the population until 2050 and beyond.

The dam in Ulu Papar was not supported by villagers. 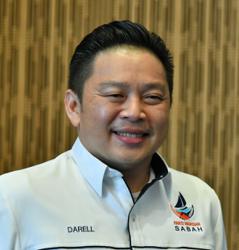