PETALING JAYA: The separation of the Attorney General's (AG) duties as both legal adviser to the Government and Public Prosecutor can only be done by amending Article 145 of the Federal Constitution, said Datuk Liew Vui Keong.

The Minister in the Prime Minister's Department (Law) said this would require a two-thirds majority vote in Parliament or at least 148 MPs.

Dr Wee, who is also the MCA deputy president, had earlier asked why the newly-minted AG was still the Public Prosecutor, with his two roles still not separated as promised under Pakatan Harapan's manifesto.

"Under Clause 3 in Article 145 of the Constitution, the AG shall have power, exercisable at his discretion, to institute, conduct or discontinue any proceedings for an offence, other than proceedings before a Syariah court, a native court or a court-martial.

"Under Section 376 of the Criminal Procedural Code, the AG shall be the Public Prosecutor and shall have the control and direction of all criminal prosecutions and proceedings under this Code.

"That is why, besides providing advice to the Yang di-Pertuan Agong, the Cabinet or any Minister on legal matters, the AG is also the Public Prosecutor," Liew said in his written reply.

He added that a Bill was needed to make amendments to the Constitution, and this Bill could only be passed if it was supported in the second and third reading by at least two-thirds of the 222 MPs.
Article type: metered
User Type: anonymous web
User Status:
Campaign ID: 18
Cxense type: free
User access status: 3 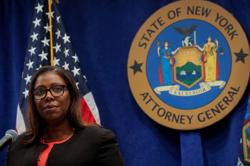