“We are looking at the finer elements of the project, particularly the technical and financial implications.

“It will be finalised with the Finance Ministry and the state governments of Sabah and Sarawak soon,” he said in reply to a question by Datuk Seri Fadillah Yusof (PBB - Petrajaya) in Parliament on Wednesday (July 25).

Phase 1 of the highway links Telok Melano in southern Sarawak to Miri in the north, and is slated for completion in 2021. Phase 2, which covers 77km to link up to Sabah, is at the planning stage. It has been previously reported that this will involve the construction of roads in Limbang and Lawas in northern Sarawak, and also go through Brunei.

It was reported that the RM29bil mega project will continue despite the change in Federal Government, but an audit will be carried out on the contractors.

Like the North-South Expressway, which has brought many economic multiplier effects to Peninsular Malaysia, the Pan Borneo Highway is expected to bring about the same benefits to Sabah and Sarawak. 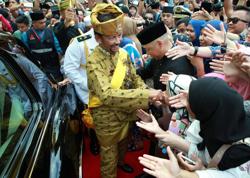