I wanted Bersih 5 rally to be a failure, Jamal tells court

KUALA LUMPUR (Bernama): Sungai Besar Umno chief Datuk Seri Jamal Md Yunos told the High Court here that his actions and that of the Red Shirts group were to “deliberately provoke” the Bersih 5.0 rally so that it would be a failure.

Jamal, 48, who was then chairman of the Gabungan Gerakan Merah Malaysia, said he decided to do so after he received information on social media that there was a possibility of a Bersih gathering at the Kuala Lumpur International Airport (KLIA) in Sepang, and several strategic places in the country on Nov 19, 2016 .

"What my group and I did was a ‘deliberate provocation' to thwart the rally. I also issued a statement at a press conference at the Putra World Trade Centre (PWTC) on the Bersih 5.0 rally,” he said during cross-examination by lawyer N. Surendran, representing former Bersih 2.0 chairman Maria Chin Abdullah, on Monday.

She is suing Jamal for linking Bersih to the Daesh (Islamic State) terrorist group.

To another question on whether he had strong evidence linking Bersih to the terrorist group in the statement he made on Sept 28, 2016, Jamal said it was based on his “assumptions".

“The statement that Bersih was involved with violence was not only made by me, even Tun Dr Mahathir Mohamad had made a statement that the violence that took place during the Bersih 3.0 rally was an indication that the Opposition would do what it could to gain power," he claimed.

Jamal told the court that he had no documents to prove the allegations he made against Bersih causing Judge Datuk Mohd Zaki Abdul Wahab to reprimand him.

"This is the court. Talk only if there is evidence. This is not a coffee shop where we can chat," said the judge.

To another question about provocative statements that appeared on his Facebook account regarding the May 13 tragedy and a flying parang or machete, Jamal said it was a  fake Facebook account and he had lodged a police report on the matter.

Meanwhile, Jamal, who was represented by lawyer Mohamed Nasser Yusof, in his witness statement said that he had no intention of slandering  anyone including Maria.

"My intention was to keep the authorities safe as the presence of Bersih participants could cause chaos, violence and public disturbance,” he said.

Moreover, he said there were previous records to show that there was damage to both public and police property.

The trial, which began in October last year, ended with Jamal's testimony today. He was the last witness.

On Oct 7, 2016, Maria, 62, sued Jamal after claiming that he had used defamatory words in a media conference at the PWTC compound which was then published and broadcast on several news portals, newspapers and electronic media.

In her statement of claim, Maria also alleged that Jamal had again used defamatory words against her at the Bukit Aman police headquarters on Oct 4, 2016 that was again picked up by the different media and published the following day.

Maria claimed that such statements had shown that she was violent and did not adhere to the law and a Daesh agent. - Bernama 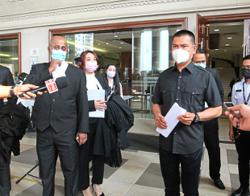