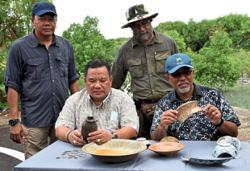 MELAKA: Coffins placed by the Portuguese community during the protest at the Melaka Gateway site office on Tuesday (July 17) are considered "sui (bad luck)" for locals, but this indicates a desperate call for survival, says state exco member Norhizam Hassan Baktee.

He said the community had no choice but to resort to this in order the capture the attention of the state government, after efforts to have their voices heard on the impact of the project on the Melaka Portuguese settlement had gone unheeded by the previous administration.

"Coffins are deeply offensive as they signify death and they have been taboo for locals since the Melaka Sultanate," said Norhizam, the Melaka Agriculture, Entrepreneur Development and Agro-based state committee chairman.

"However, Tuesday's protest was an act of desperation as the community leaders have been against sea reclamation for a long time," he said when interviewed on Wednesday (July 18).

Norhizam added that "it's a matter of survival" for the sole Portuguese settlement in the country, where many are still fishermen.

Melaka Gateway is a massive development and land reclamation project that will include three man-made islands and will feature tourism/property development, a deep-sea port, a marine industrial park and a free trade zone.

It is part of China's One Belt One Road initiative. The Melaka Gateway port will be built by companies from Shandong and Shenzhen, China in a joint venture with KAJ Development Sdn Bhd's (KAJD).

On Tuesday, some 200 fishermen from the Portuguese Settlement held a protest by organising a mock funeral in front of the office of KAJD, the Melaka Gateway developer, at Pulau Melaka here.

The protestors also slept inside coffins to demonstrate that the reclamation works had affected their livelihoods, especially that of the fishermen.

The Chairman of the Portuguese Village Community Management Council, Jacinta Lazaroo, 55, said the community hoped the state government would consider the impact of the land reclamation works.

She alleged that the developer failed to comply with the macro EIA (Environmental Impact Assessment) report of 1998.

The general manager of KAJD, Melaka Gateway's developer, Hasbullah Zakaria, said the company did not receive any memorandum of protest nor any demand for compensation form the community.

He said the project is on track while the project status report awaits presentation to the Transport Ministry and the Port Klang Authority.

Melaka Gateway will include the Melaka International Cruise Terminal, developed in partnership with the US-based Royal Caribbean Cruises Ltd on the first island, due to be completed by the third quarter of 2019.