KUALA LUMPUR: The Health Ministry will review Dengvaxia – the world’s first dengue vaccine – after a controversy that it caused deaths and worsened the disease in the Philippines.

This comes even as Malaysia is showing a downward trend in dengue cases and deaths over the past two years.

Deputy Health Minister Dr Lee Boon Chye said the Government was still waiting for the research results on Dengvaxia to decide if the vaccine would be beneficial.

“We are not just looking at reducing dengue cases but we must study this in terms of cost effectiveness, ” he told reporters at the Third Asia Dengue Summit here yesterday.

“We will review Dengvaxia.”

Developed by the French firm Sanofi Pasteur, its use in the Philippines, which had vaccinated over 700,000 children with the vaccine since 2016, had been suspended.

The manufacturer disclosed that those who had never been infected with dengue could develop a more severe case if given the vaccine and had a subsequent infection.

The Philippines is among the countries, including Mexico, El Salvador, Brazil, Singapore and Costa Rica, where Dengvaxia has been approved for marketing.

In December 2017, Health Ministry director-general Datuk Dr Noor Hisham Abdullah had said that the vaccine was not part of the National Immunisation Programme and was not available at health facilities in the country. 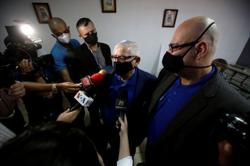