Najib's trial a step toward transparency and justice, says report

"In many countries, the arrest of a former government leader less than two months after his loss in an election would be evidence of political persecution.

"In Malaysia, however, the arrest Tuesday and brief detention of former prime minister Najib Razak in a multibillion-dollar corruption probe was an important step toward transparency and justice," said the article.

The 1MDB fund was established in 2009 to strengthen the economy but was implicated in reports of money laundering when it missed payments to banks and bondholders in 2015.

Last year, the US Justice Department alleged that at least US$4.5 billion (RM18.26bil) had been siphoned from the fund, including US$730 million (RM2.9bil) that reportedly ended up in Najib’s personal accounts.

According to Justice’s civil complaint, the money was used to buy properties in California and New York, a 300-foot luxury yacht, shares in a Hollywood production company and US$200 million (RM811mil) worth of jewelry.

Prosecutors in at least six countries are investigating the case.

"The allegations generated an outcry in Malaysia, but Mr. Najib used a draconian sedition law to silence critics and stifle discussion of the scandal.

"He then attempted to rig the general elections that were held in May, redrawing electoral boundaries in his favor, clamping down on the media and continuing to imprison popular opposition leader Anwar Ibrahim.

"In spite of those setbacks, the opposition coalition formed by Mr. Anwar and current prime minister Mahathir Mohamad raced to a surprising victory on a platform that prioritized fighting corruption," wrote The Washington Post.

The Washington Post said Najib's arrest is a "step forward for Malaysia", where corruption is commonplace in the highest echelons of government where Najib and his associates thought they were untouchable.

But the writer cautioned Malaysian authorities to move forward with the case carefully.

"Najib still has supporters across the country, so any sign that his prosecution is being mishandled could cause unrest and undermine the investigative efforts of other countries," said the article.

The Washington Post brought up the Malaysian Bar's concerns on the task force that detained Najib not having legal standing.

However, it was later revealed that he was held in the Malaysian Anti-Corruption Commission's headquarters. So the legality concerns were premature.

"Nevertheless, it is important that Mr. Najib’s due-process rights are preserved at every step of the process.

"Whatever the outcome of Mr. Najib’s case, the Malaysian government has more work to do to ensure that corruption is addressed at all levels of government.

It should take steps to strengthen the independence of prosecutors; clarify rules on donations and financial disclosure requirements; unshackle the country’s independent media and civil society groups; and provide more resources to departments investigating graft.

"The 1MDB case may be the flashiest instance of corruption in Malaysia, but it is by no means the only one," it said.

Najib pleaded not guilty to the charges. He was released on a RM1mil with two sureties. 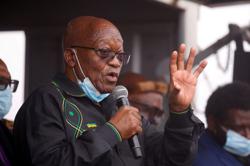