KUALA LUMPUR: Hundreds of Chin refugees demonstrated at The United Nations High Commissioner for Refugees (UNHCR) office on Friday (June 29) after being told that they would have to go back home by 2020.

The Chin - who are the second largest refugee group in Malaysia - were told by UNHCR on June 13 that the agency decided to begin the process of ending refugee status for them beginning this August.

The peaceful demonstration was organised by the Alliance of Chin Refugees (ACR).

There were many children in school clothes at the demonstration which took place for about 30min.

Five leaders from the community were later allowed into the compound for a meeting with UNHCR officers about two hours later.

“We organised this demonstration today because the Global Summit of Refugees will be held next week in Geneva, so we hope to bring this to their attention,” he said.

The Star sighted a community message bearing the UNHCR letterhead which stated that they determined that there are positive developments which are durable and sustainable based on an analysis of political, social and security developments in Myanmar's Chin state. 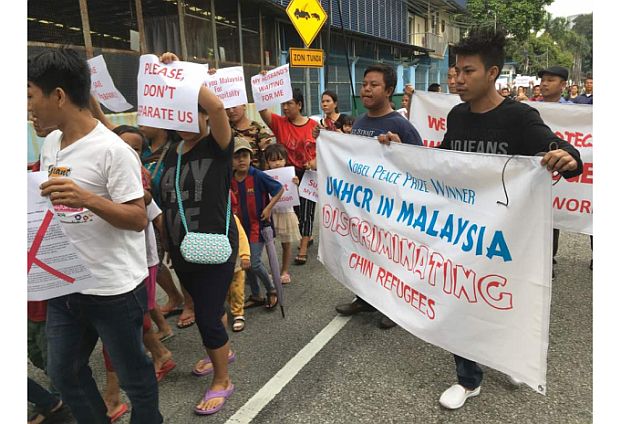 "Based on this, UNHCR presumes that ethnic Chin refugees are safely able to avail themselves of the protection of the Myanmar government, and hence are no longer in need of protection from UNHCR," read the message.

From August, Chin refugees approaching the UN agency would have their cards extended until Dec 2019 without the need for an interview.

But as of Jan 1, 2020, the individual refugee status would cease and their cards would no longer be reviewed.

UNHCR said that those who still felt they needed protection could still request for an interview.

It is understood that the decision is a global one and will affect Chin refugees in Malaysia, Thailand and India.

Another Chin refugee leader Alex Lalagent Thanga claimed that they could not return to their home state yet as there was no freedom to practise their faith and beliefs.

"Within 18 months we need to seek our future and decide it. Of course, things have changed compared to 20 years back but the truth is there are a lot of things to be changed," he added.

As of this May, there are some 157,580 refugees and asylum seekers registered with UNHCR in Malaysia and 31,150 of them are Chin.

Chin refugees have been in Malaysia for more than a decade, mostly Christians who fled their home country because of persecution against them.

Malaysia is not a signatory to the 1951 Refugee Convention or the 1967 Protocol, lacking any legal or administrative framework regulating the status and rights of refugees in Malaysia.

The Star Online has requested UNHCR for comments on the issue.