Taking Penang to the next level

GEORGE TOWN: It’s easy to understand why Chief Minister Chow Kon Yeow is such a popular figure in Penang despite hailing from Kuala Lumpur.

Holding the exco portfolio of Local Government, Traffic Manage­ment and Flood Mitigation for the last two terms here was not an easy task, but Chow’s simple, frugal and austere ways won over the people and even his harshest critics.

Now he is in the hot seat as the chief executive. Here, he shares his thoughts on his plans to move Penang up another notch over the next five years, as well as personal and party matters. Below is an excerpt from the Q&A:

How are you keeping after more than two weeks into the top post in Penang?

It’s a continuation of where I left off for 10 years as a state executive councillor in 2008. At the Chief Minister’s office, I deal with a wider range of issues than my portfolios under Local Govern­ment, Traffic Management and Flood Mitigation, which were more focused.

As Chief Minister, I also have to look into investment and economic issues, besides being chairman of Penang Development Corporation, PBA Holdings Bhd and other state statutory bodies.

Which plans do you intend to see through in your first term?

Upon taking office on May 14, I took up the Transport portfolio because I intend to see to the implementation of at least some of the projects under the Penang Trans­port Master Plan (PTMP). It is too ambitious to say that we will implement all the projects, but they will be a priority.

On the projects by Consortium Zenith Construction Sdn Bhd (CZC) comprising the RM6.43bil undersea tunnel and three paired roads, we will likely begin construction for one of the three major roads.

As for SRS Consortium, the project delivery partner of PTMP, we will start the Light Rail Transit (LRT) project. Since it is tied to Penang South Reclamation (PSR) in the southern coast of Penang island, the reclamation of three man-made islands will have to start as well to finance the LRT project.

(The PSR is a massive plan to reclaim three islands totalling 1,800ha off the southern coast of Penang island. The success of PTMP, the state government’s multi-billion ringgit public transport project involving LRT, monorail, cable cars and water taxis, depends on funding from property development on the islands.)

It is near to the Bayan Lepas industrial electronic and electrical cluster. Taking it away from the cluster will not produce the synergy effect.

And preferably, the expansion of our industrial zone into the future must also be near to the cluster and Penang International Airport facilities. 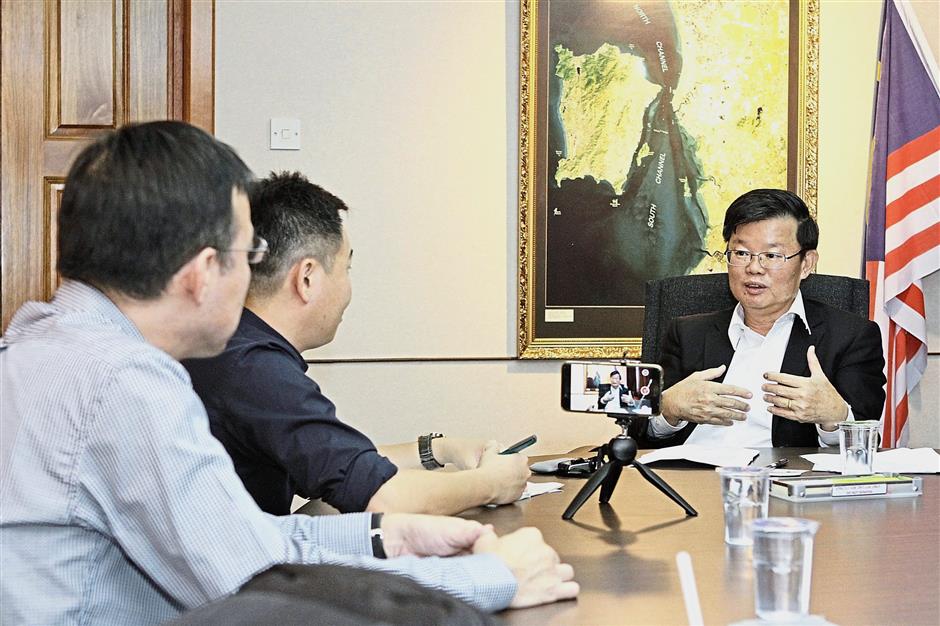 Man with a plan: Chow elaborating on his vision for Penang during an interview with The Star at Komtar in George Town.

So we can safely say that the three man-made islands are a sure thing?

It is subject to review by the Federal Government. We need approval from the Federal Govern­ment for any large-scale project and the reclamation is one of them. It has to be approved by the National Physical Planning Council. If we can get all the necessary reports to support our application, it will be tabled at the National Physical Planning Council for approval.

You said the LRT component of PTMP is your priority. When can we expect to see it materialise?

We have made a submission to the Land Public Transport Commis­sion (SPAD) since March 2016 for a railway scheme.

Besides the LRT line from Komtar to Bayan Lepas, we have also submitted the other alignment as a full package, as our depot will be built on one of the man-made islands that has yet to be reclaimed. We are still waiting for the environment impact assessment approval.

I believe our application is still active. Hopefully, it will be brought before the Transport Ministry for deliberation and approval.

Previously, it was either an undersea tunnel or a third bridge to link Bagan Ajam and Gurney Drive. What will it be now?

It is still too early to say. We can always make changes because of the cost factor. There is no firm decision on this. CZC will have to complete the feasibility studies first, which are now at 96%.

There is no hurry because even if we were to build the undersea tunnel, it would only take off in 2023.

Right now, CZC’s priority is to start building the 5.7km paired roads starting from Jalan Kampung Pisang in Ayer Itam and connecting with the Tun Dr Lim Chong Eu Express­way in Gelugor. It is one of the three major roads undertaken by CZC.

What are your thoughts on the claims that CZC paid RM22mil to cover up anti-graft investigations on the mega project comprising the undersea tunnel and three paired roads?

It is entirely up to the Malaysian Anti-Corruption Commission to investigate, as it has nothing to do with the state government. We are not the approving authorities.

The concession companies ap­pointed by us are responsible for getting all the approval. What CZC told us was that it was basically political extortion. They were under great duress and had no choice but to believe that the other party could help smooth the process of getting the necessary approval.

This had nothing to do with the state government and we had no prior knowledge of it until it was reported in the media.

Penangites have been plagued by floods on some occasions. What are your plans to resolve this?

The first phase of Sungai Pinang Flood Mitigation project was completed in the late ‘90s and it never went beyond that. This project has been delayed for 18 years.

We need about RM600mil to resolve the problem. The money can be used to build a barrage along the river near the People’s Housing Project in Sungai Pinang. If there is a barrage, backflow from the sea during high tide would not flow inland.

Other components include the construction of pump houses, retention ponds, collector drains along the river, deepening of rivers and the raising of bunds. All these measures are expected to be completed in three and a half years.

We believe these measures will help mitigate floods. All designs can only cater to a certain capacity, so we cannot say that there will be no floods after this.

It is important to secure approval and funding from the Federal Gov­ernment. The Sungai Pinang Flood Mitigation project is vital because it has impact upstream, as there are six tributaries linked to Sungai Pinang.

Many hillslope developments have taken shape, especially in the Tanjung Bungah area, which has drawn concern from environmental activists. What is your take on this?

The current state government will not change the tight guideline of restricting development 76m or 250ft above sea level, although the national guideline can go up to 500ft. The guideline is very restrictive as it will prevent a lot of hill lands from being developed.

This guideline only came into place under the Penang Structure Plan approved in 2007. Before that, approval had already been given to certain developments we can’t stop abruptly. Under this category, there are many projects approved that went beyond the restriction.

I will get the Penang Island City Council to brief me on how much land is still left that is restricted by the guideline. If there is not much land left, we will consider that the guideline will prohibit hillside deve­lopment in the future.

If the guideline is still in place, the people of Penang must confront the fact that there won’t be any development beyond this guideline. Land will become expensive. If there is no reclamation, what will the future hold for Penang island?

Gentrification is an issue in George Town, with foreigners snapping up properties within the Heritage zone. What do you think of this?

Prior to interest in our heritage buildings and before the inscription of the Unesco World Heritage Site, there were a few hundred houses in need of refurbishment. Some houses collapsed during storms.

If you look at the heritage site today, there are few dilapidated houses left due to the interest in heritage properties. The owners have greater appreciation of their value.

My personal stance is to save the house first. If there are buyers, we should save the buildings and negotiate on their use later.

The Opposition in Penang is down to only three representatives – two from Umno and one from PAS. Will they be given any allocation?

They will be given allocation, although the figure may not be the same as the Government’s assemblymen. They rejected it last time, thinking that we were setting a trap on them.

Previously we offered them RM40,000 in annual allocation, but it will be more this time. The funds can be used to support the community, as well as assist organisations in their work and in getting facilities such as fax machines. The funds are meant for the people.

The Opposition is weak in the state assembly. How do you view this matter?

In a healthy Western democracy, when there is a weak Opposition, backbenchers play a more active role in scrutinising government policy. It is a working mechanism. A new check-and-balance in the ruling coalition can emerge to play this role of checking the executives and government on the use of public funds and policy.

Regarding tourism, is there any new programme that your administration would like to introduce to attract visitors within the next five years?

We should be more selective not only in terms of quantity matters, but in terms of quality as well. We need to have niche tourism markets to get high spenders.

At the moment, we cannot be choosy as we need them to fill up our hotel rooms and patronise our local businesses. But there will come a time when it will negatively impact the local environment.

We should move up a notch by focusing on higher spending and business travellers rather than the usual travellers.

In your own opinion, what should an ideal Penang look like?

Economic growth with environmental sustainability would be an ideal situation rather than sacrificing the environment for the sake of development.

Development has to be balanced not only geographically, but also in the strata of society, meaning that the B40 class (households earning RM3,900 a month or less) must be able to benefit from the economic development.

There must be job opportunities and stable income for them. They must not be sidelined or living in poverty without jobs. If jobs can be made available to foreign workers, why can’t it be the same for locals?

You won the Pengkalan Kota state seat in 1990, but lost it in 1995. What was it like having to start from square one?

I was back to full-time party work in 1998 to lead the party after the “Knock Out Kit Siang” internal party strife. After 1999, I was picked as state DAP chairman to continue the party’s struggle in Penang.

What was it like being a DAP-elected representative before and after 2008?

Very different. The government representatives have more resources to serve the people better. But we keep instilling the idealism of our party struggle and the long-term vision to win Federal power into our representatives so that they see a bigger vision for the party and themselves.

Many Penang DAP leaders are now in their 60s. Has the state party leadership identified the next echelon of leaders?

The party made a bold decision by fielding many new candidates in the 14th General Election. They have potential for future development in the Government and party. This is a rejuvenation process to prepare them for the future.