PETALING JAYA: Tun Dr Mahathir Mohamad has named three key members of his Cabinet alongside a council of eminent persons who will advise the Government on economic and financial matters for the first 100 days of his administration.

The three will join the Prime Minister and his deputy, PKR president Datuk Seri Dr Wan Azizah, in a Cabinet line-up that will eventually have at least 25 members.

Dr Mahathir announced the line-up at a media conference after the Pakatan Harapan presidential council meeting.

There were no PKR leaders present during the media conference other than Datuk Saifuddin Abdullah, who is also Pakatan secretariat chief.

Dr Mahathir’s announcement came a day after he said Pakatan Harapan would unveil a “small Cabinet” with 10 ministers in the initial list.

He said the ruling coalition needed “a bit more time” to determine the rest of the line-up. Fielding the press: Dr Mahathir waving to members of the media during the press conference at Menara Yayasan Selangor, Petaling Jaya. With him are (from left) Lim, Muhyiddin and Mohamad.

“We can’t say ‘abracadabra’ and everything will happen. It takes time. We have to study these people, their qualifications and fitness for each ministry,” he said.

He added that all four Pakatan component parties must be represented in the Cabinet.

The Prime Minister said each party would recommend three names for the remaining seven Cabinet positions for his consideration.

Dr Mahathir did not rule out the possibility of having more ministers to include members from Sabah and Sarawak or certain organisations.

He said the initial line-up of 10 ministers would be named soon, while the full Cabinet would be appointed in two to three weeks.

As the Cabinet would consist mostly of ministers with little or no experience in running a government, Dr Mahathir said the council of eminent persons would help shape policies and programmes to achieve Pakatan’s 100-day promises. 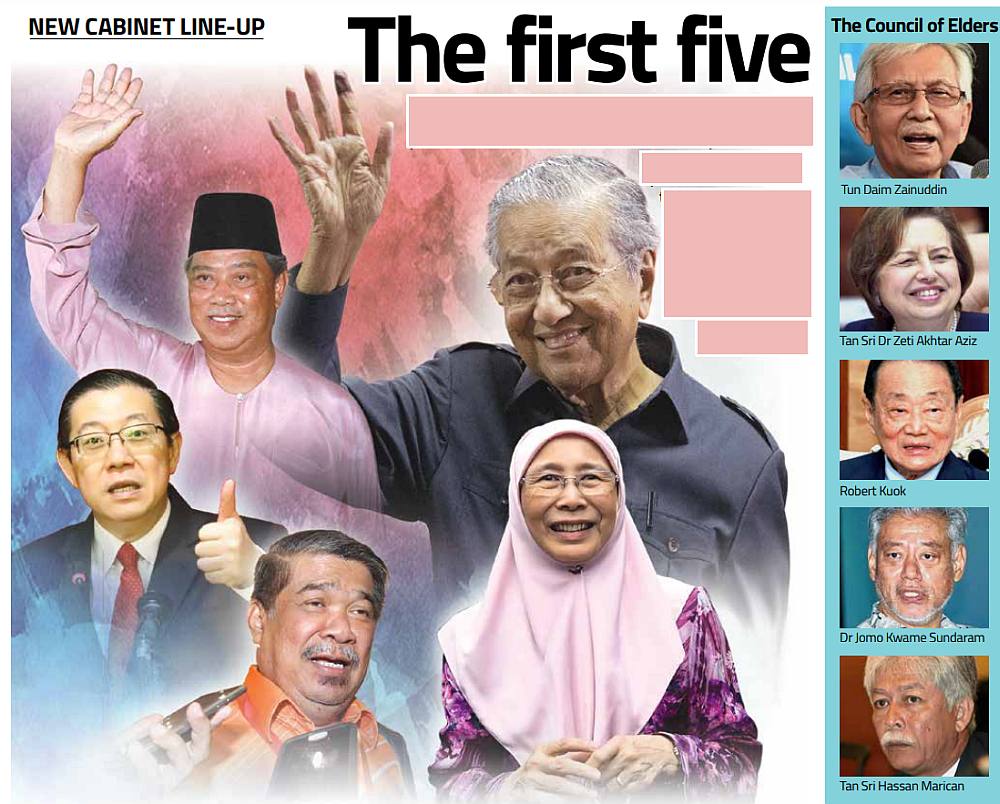 “We need expertise from people with knowledge of previous administrations or those who have held certain posts.

“The council will do the initial studies based on reports submitted by ministry officers and other parties before preparing Cabinet papers,” Dr Mahathir said.

He added that before the Cabinet could function fully, the Government had to carry out investigations on “a lot of things”, hence people who were impartial were needed to vet and study the reports.

“We will get all the data on various organisations, including those running government funds as well as some of the ministries, which may have been involved in some of the previous government’s misdeeds,” he said.

The council would study events that had happened from 2009 until now as the new Government wanted to take action as soon as possible if necessary, added Dr Mahathir.

“One thing we feel is very important are issues involving the Finance and Defence ministries.

“A lot of things have happened and we need to have them (the council) focused on the two ministries initially.

“Later on, the Home Ministry will have to be advised on what it needs to do,” he said.

The Prime Minister hinted that the new Government was on the lookout for a new Attorney-General.

“We are studying names and their suitability,” he said in a brief reply, when asked about the fate of the current A-G Tan Sri Mohamed Apandi Ali.

On the possible volatility of the stock market when it opens tomorrow, Dr Mahathir said the Government would monitor the market and take necessary actions.

On whether accepting Barisan Nasional-elected representatives constituted a betrayal to the people who voted them out, Dr Mahathir said Pakatan was willing to accept such leaders but on a case-by-case basis.

He said some people in the previous government had no choice but to follow orders.

Pakatan would accept them if they wanted to join any of the Pakatan parties or become independents who supported the coalition, provided that they were free from charges, Dr Mahathir said.

A-G’s report on 1MDB to be made public, says PM