PETALING JAYA: With over five billion views, the 2017 hit Despacito recently broke records to become the most-watched video on YouTube but it has been reportedly hacked.

Hackers calling themselves Prosox and Kuroi'sh purportedly replaced the video content with a picture of armed, masked people in orange jumpsuits, believed to be a still from the Spanish television series Money Heist.

The visual in question is not a scene from the music video, which was reportedly defaced on Tuesday.

A search on the popular video-sharing website showing that the official LuisFonsiVevo account has removed the video from its uploads.

A check on the artiste’s YouTube channel showed that other versions of the summertime smash by Luis Fonsi and rapper Daddy Yankee, such as the remix featuring Justin Bieber and the Mandarin version featuring JJ Lin, were not affected by the hack.

According to BBC Online, the hackers had written "Free Palestine" underneath the videos they targeted.

This includes videos by Shakira, Selena Gomez and Taylor Swift, with the original clips having been posted by Vevo.

The Star also sighted the changed title of singer Adele’s Hello video, which was uploaded by her AdeleVevo YouTube channel, that now reads as “x - Hacked by Prosox & Kuroi'SH greats : 18-25 from JVC”.

In another tweet directed at video hosting service Vevo, @ProsoxW3b said: "@Vevo You have all my respect but do not leave the control to your site to any developer did not take into account this hacking it was a fun if we would like to harm your customers we would delete all the video but I did not delete despacito must believe me."

The account’s cover image is the same as the Money Heist still featured in the Despacito video. 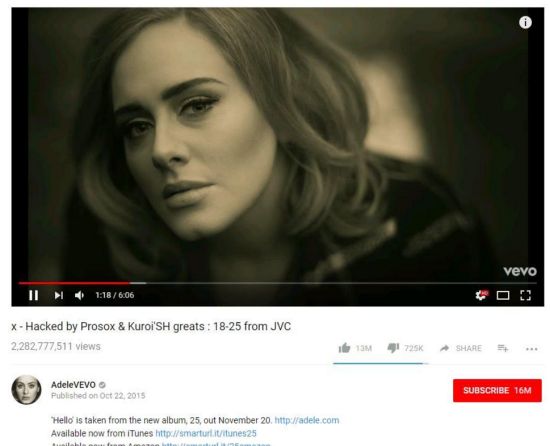