PETALING JAYA: The huge increase in the number of residents and registered voters in Selangor were among the main reasons taken into consideration for the constituency redelineation.

The Election Commission said in its report that the number of voters in the state had increased by 51.8% since the last redelineation exercise in 2003.

“The EC decided that while there will be no additions to seats for this redelineation, there will be amendments to the electoral borders for almost every seat except for P092 Sabak Bernam, P093 Sungai Besar, P094 Hulu Selangor and P113 Sepang,” the redelineation report stated.

Selangor has the highest number of voters – 18% – in the country.

The report added that based on the Population and Housing Census 2010, the Petaling district was the third largest district in terms of population density with 3,524 people per sq km.

It also said that the population was concentrated in industrial areas, namely Petaling, Gombak and Klang, which accounted for two thirds of the Selangor population.

The EC stated that there were areas where their housing developments had reached a “saturated” stage, such as in Bukit Bintang where any increase would be low.

“Areas such as Batu, Wangsa Maju, Setiawangsa, Segambut, Titiwangsa, Lembah Pantai, Cheras and Bandar Tun Razak on the other hand, are the focus for rapid housing development.

“Bandar Tun Razak might be seen as saturated with development but there is still room for housing development there.

“Along with the current development of the housing industry, the EC believes all the constituencies in Kuala Lumpur will have the same number of voters in a short period,” it said. 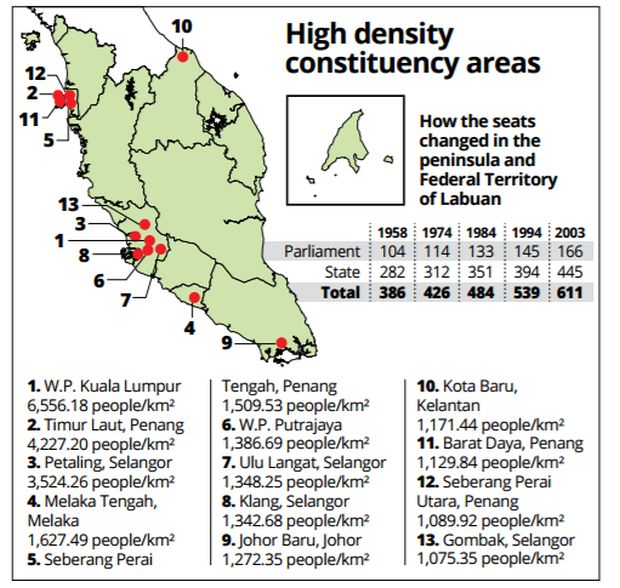 The EC said it gave more consideration to the smaller number of voters in certain areas to ensure a more balanced form of representation.

“There is an imbalance due to the high population density in the Central Melaka District as compared to Alor Gajah and Jasin districts,” it said.

Two constituencies in Penang – Kepala Batas and Balik Pulau – supposedly had their electoral borders amended but there were no changes in the number of voters there. Kit Siang ordered out – but stays on