Recently, Wan Mafudah, a graduate of the Intec Education College, Kuala Lumpur, enjoyed the fruits of her labour when she was announced as the world prize winner for the Association of Chartered Certified Accountants (ACCA) Financial Reporting paper.

The success is a historical achievement for the native of Kampung Tok Raja, Jertih, as she is the first Malay to attain number one world-ranking with her score of 95 per cent in the paper.

Previously, the highest achievements reached by several Malays from 2015 until last year, were as second, third and sixth ranking ACCA World Prizewinners.

When met by Bernama today at her parent's house in Kampung Tok Raja, the third of seven siblings who aspired to become an accounting lecturer said she was thankful to be able to prove that Malays could also master the field.

After getting a top score of 8A1s and 1B for SPM, Wan Mafudah, who was also a former MRSM Besut student, pursued her studies in accountancy for one and half years at the Poly-Tech Mara College in Kuala Lumpur before receiving a scholarship from Permodalan Nasional Berhad and continuing her education at Intec Education College.

Sharing the secret to her success, Wan Mafudah said she liked to practice her knowledge by sharing the knowledge acquired with others as it also helped to increase her understanding.

“I suggest that emphasis be placed on accountancy, commerce, economics and English from the early secondary school level as these are the foundation subjects in the mastery of accountancy.

"Early exposure also needs to be given in the basics of Information Technology and mathematics as well as mastery in at least three other languages,” she added. - Bernama 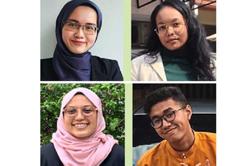