KAMALA Shirin Lakhdhir steps into the library on the south side of her residence in Kuala Lumpur and quickly begins to connect with her guests.

It is evident in the body language of the US ambassador to Malaysia as every conversation begins.

The career diplomat, who is in the second year of her posting here, teases that she has no control over the items inside the bungalow-style residence, which is visited by top US officials and Hollywood celebrities.

“It was all decided by the State Department,” she says with a laugh.

The art on the walls, however, change with each new ambassador, with the State Department allowing them to display American art on loan from museums or galleries during their postings.

The Harvard College graduate, who joined the foreign service 27 years ago, takes pride in her collection of books on the wall-to-wall cabinet. “There are more upstairs,” the voracious reader reveals.

Lakhdhir has held postings in China, Indonesia and Saudi Arabia, and was US Consul-General in Belfast, which is the second oldest continuously operating US Consulate in the world.

Her parents’ strong belief in American values inspired her to become a diplomat. 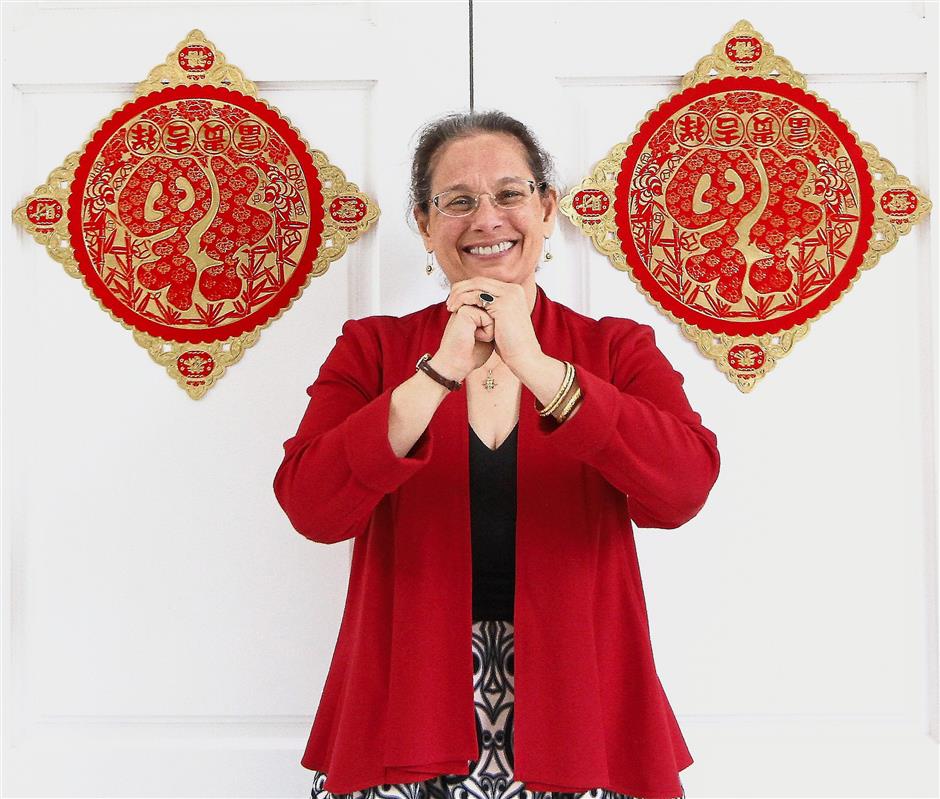 Lakhdhir’s father was born in Mumbai in 1925 and attended the University of California, Berkeley on what she describes as “the miracle of a full scholarship”.

“When he moved to New York a few years later, he met my mother, who was there studying for a master’s degree in international relations,” she adds.

The ambassador’s interest in the affairs of Malaysia goes way back, even including a visit to Batu Caves in 1990.

> We hear you’ve been hitting the ground, even going to Batu Caves for Thaipusam.

Haha! Morgan asked me, “Are you going to climb?” He said he would come along if I was going to climb up. I said, “No, there will be many visitors and devotees.”

After the Deputy Prime Minister left, some people asked if I wanted to walk up. I did not want to bother people about security. And then we all said, “We have to climb!” So, we climbed the 272 steps to the top.

Our next target is Gunung Kinabalu.

> Your greetings to Malaysians during the major festivals are in the form of videos. What’s the reason for this approach?

Yeah, we started a small-scale DreamWorks in the public affairs section (DreamWorks Pictures is a film production label founded in 1994 by Steven Spielberg).

We have just done one video for Chinese New Year, which will be released on Feb 12. We went to the Thean Hou Temple to shoot it. Last year, we made our first video with a lion dance shoot.

It is a great way to reach people. We had one video on a Malaysian (22-year-old Saranjoe Sukcha), who is a US Coast Guard Academy cadet. This was one of the most popular videos.

Saranjoe is sixth in his class at the academy and hails from Kedah.

> Can you tell us about your public diplomacy initiatives?

Malaysians now receive their information and news not just from print media but also through WhatsApp, Twitter and Instagram. If we want to reach out to the younger generation to find out how they are getting their news and the impressions they have of Americans, we have to be more flexible and creative in what we do. We are trying our best to respond to what Malaysians, particularly the youth, are interested in.

The other thing I have done since I came, and this is with both the American Chamber and US firms, is ask them what they are doing in terms of corporate social responsibility. My goal is to highlight the values and contributions that American companies are making towards Malaysian society and communities.

In many US firms here, the leadership and workforce are Malaysian. It is a great story about how the United States and Malaysia have grown together economically. When I go to Penang and meet with companies like Honeywell, they are working on self-driving cars. When I talk to Motorola, they are working on all sorts of cutting-edge designs. These are Malaysian engineers.

> What is new on the US-­Malaysia front?

Our relationship is strong. This is the first year of the Trump administration. We are building on the past to make it stronger. Secretary of State Rex Tillerson visited in August 2017. Prime Minister Datuk Seri Najib Tun Razak went to the United States in September.

Many American firms have been here for a long time. There are new firms too. And then we have people-to-people (exchanges). We got 100 new English Teaching Assistants (ETAs) in January.

This is a programme funded between the US and Malaysian governments. They have just gone out to 100 new schools. I will start visiting them whenever I go to a state. I can keep going – there is a huge amount of cooperation on the economic side, law enforcement, counter-terrorism and military-to-military activities.

Q: Najib and Trump pledged to work closely when they met in Washington. Have things changed with the Prime Minister criticising the President’s decision to recognise Jerusalem as the capital of Israel?

As President Trump said, his decision was an acknowledgment of the long-standing reality that the Israeli government, the offices of their legislature, Prime Minister, Cabinet and their courts are all in Jeru­salem. He also stated that his decision to recognise and acknow­ledge that did not pre-judge final status negotiations on the sovereignty of Israel over parts of Jerusalem.

I’m well aware that the Prime Minister, the Malaysian government and many Malaysians in general don’t agree with the President’s decision. I would say I understood that was going to be their decision. I think we are very good partners and friends, so we can have frank conversations when we disagree.

> But Trump has threatened to cut off aid to countries which voted against his move, saying they are “enemies of America”. Will Malaysia be affected?

> What aid do we get from the United States?

Malaysia is a medium-income country, so a lot of our cooperation and support come in the form of sharing costs. With the ETAs, for instance, we put in resources and they are run by our joint Fulbright Commission, with both Malaysians and Americans overseeing that.

We have a lot of military-to-military training and exercises, some funded through the US military. We have law enforcement cooperation. We have worked together on science and environmental conservation and public health. In these areas, we have sent Malaysians on exchanges and have also brought Americans here to work with Malaysians.

A lot of our cooperation, exercises and training bring great benefits to both our countries. You may already know that we do the Pacific Partnership (annual deployment of forces from the Pacific Fleet of the US Navy). It is a multilateral exercise. In 2017, the Malaysian, US, Japanese, South Korean and Australian militaries gathered in Kuching to prepare together for the possibility of the need to respond to natural and humanitarian disasters such as tsunamis and earthquakes.

Also, Malaysia and the United States are co-chairs for three years of an Asean effort to prepare Asean members for humanitarian disaster response.

> Fourteen EU Ambassadors met with Tun Dr Mahathir Mohamad recently. Did you think that it was within their ambit to meet the former prime minister who now leads the Opposition?

I will speak as the American ambassador, as I can’t speak for them. The role of ambassadors and embassy personnel is to meet with people across Malaysia, including other political parties.

That’s the role of diplomats – we meet with people in the government and those outside of the government. We deal with NGOs, civil societies and journalists. And if we meet with Opposition or government figures, that is not an endorsement of their political ambitions. That is what we do as diplomats and we do it worldwide.

We respect that it is up to the Malaysian people to pick who would be their leaders. When I travel and meet with people from every political party, I ask them their views, perspectives and agenda if they were elected or re-elected. That does not mean that I endorse anyone or any particular party or political figure.

> So, you are interested to know what the Opposition is up to?

Of course. Because in the future, depending on who the Malaysian people decide is going to be the government, whether it is the current ruling party or another, my role is to sustain the bilateral relationship with whoever is elected. That is my responsibility and what I have been asked to do by the US President.

> What is your take on the political discussions going on now?

Our embassy is focused on what’s happening. In my prior career, I was a political officer. Now I am the ambassador. We try to talk to everyone to figure out what is happening. It is interesting as there is a lot of debate. The biggest debate is, of course, when (the general election will be called).

Personally though, I feel that we are narrowing the time. I’m going for before May 15, that is my sophisticated analysis. But definitely before August!

What is interesting is what’s happening in every state in terms of politics at the national level and in Sabah and Sarawak, and the nature of the ruling coalition and the Opposition. Now we have a former prime minister as a candidate for the Opposition. And what’s happening with PAS? I find Malaysian politics complicated, but in some ways the things that are happening feel very American.

> Is there any doubt in your mind that the coming general election will be free and fair?

> What are your views on TPP going through without the United States?

As sovereign governments looking out for the best interests of their people, the TPP-11 pursue their own trade policies. The United States is pursuing a trade policy that best serves the interests of our businesses, workers and long-term economic security. The United States is fully committed to strengthening our economic relationships across the Indo-Pacific region, including with each of the TPP-11 countries, in a way that best serves the interest of Americans.