Two dolphins found dead in less than a week

GEORGE TOWN: A dead dolphin was washed ashore in Tanjung Bungah, the second within six days.

Environmental activist Andrew Ng Yew Han said the first dolphin, which was decomposing, was spotted last Friday at the same stretch of beach behind a hotel in Tanjung Bungah while another was found yesterday.

“I’ve asked the fishermen and residents’ association to let me know if there are more sightings of dead turtles or dolphins, and I alerted the authorities over the years whenever there are such sightings.

“This is to create more awareness and pressure the authorities to investigate such matters as it is vital to find out their cause of death,” he said. 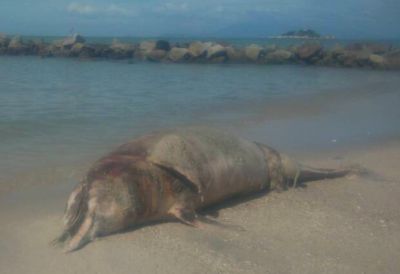 The carcass of the first dolphin discovered, which is of the Indo-Pacific Humpback species.

Senior lecturer Dr Leela Rajamani from the Centre for Marine and Coastal studies of Universiti Sains Ma­­laysia, confirmed that the de­­com­­posing dolphin was that of an Indo-Pacific Humpback.

She said the humpback species was among the four main species in Penang.

“We see them going around the island and they are commonly sighted in a big group heading north, west and south of the island.

“A post-mortem is needed to identify their cause of death.

“We are looking for funding. A proper lab is needed to do a post-mortem,” she said.