KLANG: Transporting his late grandmother, who was a heart patient, for her medical check-ups at the National Heart Institute inspired M. Sashitharaan to provide a shuttle service for elderly patients in his neighbourhood.

“I realised I was able to attend to my grandmother’s needs because I was running my own business. But it would be very difficult for others who are working,” he said.

The 35-year-old entrepreneur, who is one of the 10 winners of this year’s Star Golden Hearts Award, has helped more than 100 sick people for over a year by providing them with free transport to medical centres, government clinics and hospitals.

The Port Klang-born managing director of Sri Sairam Enterprise Sdn Bhd arranges to fetch patients who are 60 and above for dialysis and medical appointments in Klang and Shah Alam.

“I take a lot of joy from the feedback I get from patients who receive the free transport service,” said the Bandar Botanic MIC chairman. “I am grateful that I have been granted the opportunity to offer my little service to these people who are in need.”

Sashitharaan realised that most of the children or spouse of the patients had difficulty sending them for medical check-ups.

The busy working children would be forced to adjust their routine so that they could take their parents for the appointment.

Some had to spend a lot on taxi fares for such a purpose.

“All those involved, including the patients and their family, have been going through some form of struggle,” he said.

In the beginning, Sashitharaan catered only to elderly patients who patronised government hospitals, but gradually expanded the service to include dialysis patients.

He started by distributing application forms for the free transport to patients at the Tengku Ampuan Rahimah Hospital in Klang and the service took off with 10 patients. 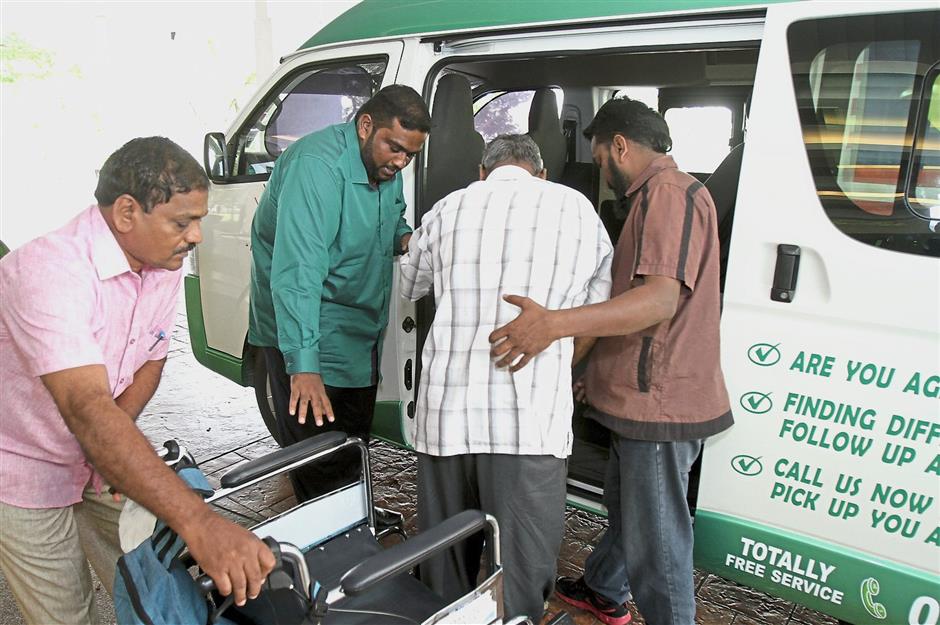 Social service: Sashitharaan (in green shirt) and Chandrasegaran (in brown shirt) assisting a patient into the van following a dialysis session at a private medical centre in Klang.

“We have more than 110 patients now and a large number of them are dialysis patients who have to make three visits every week compared to only one visit in three months for medical check-ups,” he said.

Sashitharaan is happy that his service has reached out to people in need from all races and social backgrounds – including those who are wealthy but still need the service.

“I feel good to see Malaysians of all races benefiting from the free service,” he said, adding that he bought a new 10-seater van and hired a driver.

He spends RM8,000 a month on the van instalment, salary, fuel and maintenance.

His office keeps a database of the patients and also maintains a personal file on each of them, with records of visits and check-ups at the dialysis centres and hospitals.

One of his office employees volunteered to manage all the record keeping.

“I believe there will be others like my staff who are inspired to do their part,” he said.

“I hope young leaders will find a role for themselves to serve society and not spend too much time rubbing shoulders with top leaders.”

Sashitharaan reveals that K. Chandrasegaran, 33, who drives the van, has done a wonderful job.

The former taxi driver, he said, was very dedicated and served the patients both as the driver and minder.