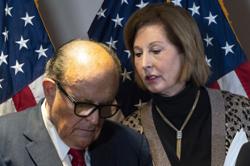 Campaign gets villagers cleaning up

Forty-six of those who took part in the campaign – which was also open to the public – gained between 1kg and 7kg despite being rewarded to lose weight.

Under the “Fight Obesity for a Better Quality of Life” campaign, those taking part, including Form Five students, teachers and members of the public, had to control their weight over a period of six months and then have their body mass index measured.

“To my horror, some 30% have actually gained weight,” he said in his speech at the closing ceremony yesterday.

Dr Hii said with the national obesity rate at 50% of the total population, the campaign results could suggest this was on the upswing.

“Suffice for me to say here that it has proven to be a difficult task for a significant percentage of participants to lose weight, even with cash incentives,” he said.

Congratulating those who actually managed to lose weight, Dr Hii said he hoped they would continue to keep it under control to fend off diseases related to obesity.

He urged those who gained weight to try harder as obesity could lead to heart disease and diabetes.

Next year, the company will embark on Phase 2 of the campaign in Kuching, Bintulu and Miri, with another five schools selected in each location.

Campaign gets villagers cleaning up