“He is definitely suitable for the post due to his extensive experience in Special Branch.

“In fact, I expected him to be appointed much earlier when he was transferred from Johor.

“Now that he has been appointed, it fits very well due to his knowledge, background and experience in intelligence work,” he said when contacted yesterday.

He said the former Johor police chief was an asset to the police force and the country.

“He is a good man and the right choice for the post.

“His experience in Special Branch makes him the right choice,” he said.

“I have been his mentor and his superior during my career in the police force.

“Even when he first started in the force, I could see he had a lot of potential in intelligence organisation and networking,” he said.

Mohd Yusoff, who was also the former Terengganu SB chief, said Comm Mohd Mokhtar showed a lot of initiative when he was posted to the state.

“He has the right tools to further enhance the department.

“I am 100% in support of him becoming the new director. His experience in the intelligence aspect of policing is not just limited locally, but abroad as well,” he said.

He was the Bukit Aman Narcotics Crime Investigation Department (NCID) director since April 2015 and also one of the longest serving Johor police chiefs. 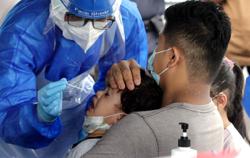