By HEMANANTHANI SIVANANDAM and SYED AZHAR

KUALA LUMPUR: Kampung Baru must be developed to keep up with modern times but its Islamic spirit and Malay characteristics should be retained, said Deputy Prime Minister Datuk Seri Dr Ahmad Zahid Hamidi.

He said there was a time when people associated Kuala Lumpur with Kampung Baru and vice versa, but the situation has changed drastically as the iconic Malay settlement that is over 100 years old is now dwarfed by skyscrapers.

“So we will lose out if we don’t develop Kampung Baru,” he said when launching a condominium project Residensi RAH in Kampung Baru yesterday.

Dr Ahmad Zahid said people should not be too nostalgic about history to the point of refusing to embrace new development.

He said it was vital to maintain the spirit of Islam in the proposed development of Kampung Baru and reminded others not to interfere in the religion.

“When we talk about the Islamic spirit, I meant that there must be balance between our material world and the afterlife.

“It has to be blended together for us to uplift our iman (belief) and taqwa (piety) to become complete Muslims,” he added.

Dr Ahmad Zahid also hoped the residents of Kampung Baru would support and cooperate with government agencies or developers so that the area could be developed on par with its surroundings.

Speaking after a working visit at KL Sentral later, Dr Ahmad Zahid who is also Home Minister said the Government was looking at reviewing the relevant laws to enhance the use of CCTV as a prime tool in checking radical elements and terrorism, besides crimes.

This, he said, would allow the authorities to check CCTV images to conduct profile checks on those suspected of being involved in undesirable activities.

He was there to inspect the efficiency of CCTVs and look at ways to improve the safety of 200,000 commuters who use the facilities at KL Sentral daily.

He said the CCTVs at the station would be synchronised with the police central CCTV system to enable the authorities to react swiftly on any potential threat. 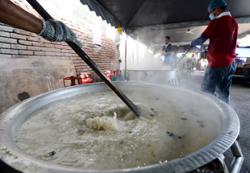