GEORGE TOWN: Fame came but it was something char koay teow “sifu” Tan Chooi Hong could do without.

“Please do not photograph and write about me,” he pleaded.

The 76-year-old said he could not cope with the influx of customers after he was named one of the Top 50 World Street Food Masters.

“Stop. Please don’t. There are too many (customers) already,” he said briefly in Hokkien, as he added some cockles into the wok of sizzling flat rice noodles at this stall in Siam Road here.

Both Tan and his son-cum-helper Kean Huat, 52, only knew about the ranking when customers told them about it.

“We are happy. It’s quite a surprise for a roadside stall to make it into the world map,” Kean Huat said.

Tan is one of the few char koay teow hawkers still using charcoal to fire up the wok for a better wok hei (intensity of the heat) flavour.

He is no stranger to Penangites and visitors from other states even before the recent recognition. Customers would queue up for the char koay teow master even before his arrival on his push cart stall.

The queue would get extremely long especially on weekends and public holidays. The queue would stretch 20m from the stall into the adjacent Anson Road.

Most would pack the Hock Ban Hin Cafe, a coffee shop located opposite Tan’s stall, by ordering beverages from the shop and char koay teow from Tan while others would stand and eat beside Tan’s stall which operates from 3pm to 11pm from Tuesday to Sunday.

Penang nyonya Sheryl Limawarty who got her char koay teow fix there last Friday said it was extra crowded after the recognition.

“I ordered at 4pm and paid the uncle. I came back at 7pm and it was still not ready! He’s even more popular now.

“I saw many people having two plates each,” said Sheryl who travels between Penang and Kuala Lumpur frequently.

A video uploaded on Facebook recently saw some 15 people queuing up at Tan’s “spot” in Siam Road even before he arrived.

“He cooks it over a perfected-over-the-decades, wood fired wok and the smoky smooth appeal, is the reason for the lines wherever he drags his cha kway teow cart to”.

They were selected during the congress and evaluated according to the grade of ingredients, food preparation, hygiene level, adaptability, consistency and confidence, as well as quality and flavour of food. 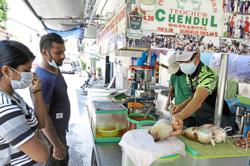 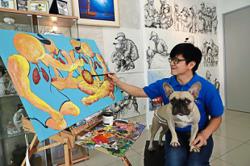 Thanking frontliners in his own way