PETALING JAYA: Temperature differences between parts of Kuala Lumpur and its neighbouring rural areas have been found to be as high as 10°C and the gap is widening, research has shown.

This is causing heavier rainfall, resulting in more severe flash floods and hotter temperatures in the city and suburbs than surrounding areas. Ironically, the rainfall is heavier in the cities than in rural areas such as Hulu Langat, where the dams are located.

Climate expert Prof Datuk Dr Azizan Abu Samah from Universiti Malaya said this was due to the “urban heat island” effect, where cities get increasingly warmer compared to surrounding rural areas due to rapid development.

“Due to the increased development of Greater Kuala Lumpur, the urban heat island or hot areas are growing,” he said.

The differences in temperatures between urban and rural areas are also widening by 0.4°C per decade.

Apart from getting hotter, the country’s urban areas are also likely to get heavier rainfall as more rain can occur when a bubble of heated air forms over a very warm area.

The increased rainfall in urban areas, Dr Azizan warned, could add to the risk of flash floods in cities.

“This is because much of the rainwater cannot be absorbed into the ground in built-up areas, causing it to remain on the surface, especially where drainage is poor,” he said.

The report, titled “Achieving a System of Competitive Cities in Malaysia”, said climate change is expected to worsen the urban heat island effect and cause more heatwaves and heavy rain in urban areas.

Heavy and more frequent precipitation events are expected and will increase the risk and severity of urban flooding and landslides, according to the study, which was released in December 2015 and carried out with the cooperation of the Economic Planning Unit and Khazanah Nasional Bhd.

Parts of the Klang Valley, including Kuala Lumpur, have become notorious for being inundated during heavy downpour in recent months.

In one of the most recent episodes, four roads in Kuala Lumpur – Jalan Bangsar, Jalan Semantan, Jalan Pantai Baharu and Jalan Pudu – were flooded following heavy rain, causing cars to be submerged in water up to their windows.

Other cities, including in Penang, have also been hit by a rising number of flash floods.

On May 27, a downpour which lasted for a few hours submerged the inline baggage area of the Penang International Airport in Bayan Lepas on the island and flooded several low-lying areas on the mainland.

Green lungs and other forested areas help to cool down urban areas and act as a sponge to absorb excess rainfall in the event of heavy storms, reducing the risk of floods, he said.

“Keeping the city green does not mean we should build more golf courses,” he added.

“It means we need to protect the forested areas in our cities due to the forests’ higher leaf index and ability to help reduce temperatures and absorb water.”

“When we spent billions of ringgit to build the SMART tunnel, some people said it was a waste of money. But now it’s considered a success.”

He said the focus should be on how to protect other parts of the city, which are also prone to flash floods, especially in light of rapid development. 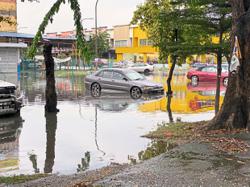 Council to chop down trees to solve flood issues