KUALA LUMPUR: Three foreign workers were injured when a portion of a building under construction along Jalan Kia Peng collapsed.

Kuala Lumpur Fire and Rescue Department director Khirudin Drahman said the department received a distress call about the incident at 5.19pm on Saturday.

Khirudin said that the injured workers had already been sent to the hospital before firemen arrived at the scene at about 5.30pm.

He added that the collapse is believed to have been due to weaknesses in the concrete and beams. 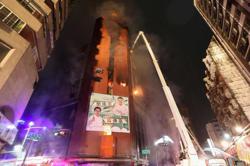