KUALA LUMPUR: North Korean ambassador Kang Chol has been declared persona non grata in Malaysia and has been asked to leave the country within 48 hours.

Kang Chol (pix below), who was summoned to Wisma Putra at 6pm Saturday, failed to turn up at the ministry.

The Foreign Ministry has sent a diplomatic note to the embassy in Bukit Damansara to inform Kang Chol of the decision that he "is expected to leave Malaysia within 48 hours from the scheduled time of the meeting, namely 6pm on March 4 2017".

The Malaysian Government had demanded a written apology from North Korea for accusations made by the ambassador over the murder of North Korean Kim Jong-nam at Kuala Lumpur International Airport 2 on Feb 13.

The action by the Malaysian Government was taken amid heightened diplomatic tension between the two countries following the murder.

1. Pursuant to my instructions, His Excellency Mr. Kang Chol, the Ambassador of the Democratic Peoples’ Republic of Korea (DPRK) was summoned to the Ministry of Foreign Affairs. He was to have met with YM Ambassador Raja Nushirwan bin Zainal Abidin, the Deputy Secretary General for Bilateral Affairs of the Foreign Ministry, today at 6.00 p.m.

2. However, neither the Ambassador nor senior officials of the Embassy was in a position to be present at the Ministry.

3. For this reason, the Ministry has via a Diplomatic Note sent to the Embassy this evening, informing the DPRK government that His Excellency Mr. Kang Chol that the Malaysian government has declared him Persona Non Grata. He is expected to leave Malaysia within 48 hours from the scheduled time of the meeting, namely 6.00 p.m. 4 March 2017.

4. It can now be revealed that at 5.00 p.m., Tuesday, 28 February 2017, officials from the Ministry of Foreign Affairs, led by the Deputy Secretary General for Bilateral Affairs, met with the High Level Delegation from the DPRK led by H.E. Mr. Kim Song. During the meeting, the Malaysian government demanded a written apology from the DPRK for the accusations recently made against Malaysia by the DPRK Ambassador.

5. The DPRK delegation was informed that if no response is received by 10.00 p.m. that day, the Malaysian government would take measures that would best protect its interests.

6. Almost four days have passed since the deadline lapsed. No such apology has been made, neither has there been any indication that one is forthcoming. For this reason, the Ambassador has been declared Persona Non Grata.

7. Persona Non Grata literally means “Person Not Appreciated”. A person declared as such by the receiving State is barred from entering or remaining in the country. It is the most serious form of disapproval that the country can apply to foreign diplomats.

8. It is also often used to express displeasure at the conduct or policies of the sending State.

9. According to Article 9 of the Vienna Convention on Diplomatic Relations (1961), the receiving country may at any time and without having to explain its decision, declare ambassadors or heads of missions or any member of the diplomatic staff as Persona Non Grata. In such cases, the sending State shall recall the person or terminate his function with the embassy or mission. If the sending State refuses to do so, the receiving State may refuse to recognise the person concerned as a member of the embassy or mission.

10. It should be made clear – Malaysia will react strongly against any insults made against it or any attempt to tarnish its reputation.

11. It should be recalled that the Ambassador had alleged that the conduct of the investigation into the death of a DPRK citizen on 13 February 2017 indicates that the Malaysian government had something to hide and that Malaysia has colluded with outside powers to defame his country.

Recent events, including the release of Mr. Ri Jong Chol, a DPRK national, from police custody for the lack of evidence to charge him, is proof that the investigation is conducted in an impartial, fair and transparent manner, as befits a country that practices the rule of law.

12. The expulsion of the DPRK Ambassador comes at the heels of the decision of the Malaysian government, announced by YAB Dato’ Seri Dr Ahmad Zahid bin Hamidi, the Deputy Prime Minister that effective on Monday, 6 March 2017, citizens of the DPRK require visas to enter Malaysia. This is an indication of the government’s concern that Malaysia may have been used for illegal activities.

13. These measures are part of the process by the Malaysian government to review its relations with the DPRK. 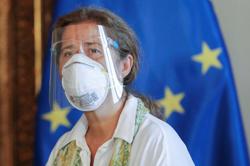