Mane attraction: Saleng, the 25-year-old lion, lazing on a boulder at the Malacca Zoo.

MALACCA: Saleng the lion, also known as The King of Malacca Zoo, is old and the authorities are suggesting that it be allowed to rest and no longer be put on public display.

State deputy exco member Datuk Ghazale Muhamad said the 25-year-old lion was close to 175 years old in human years and should be allowed to rest.

It has also not had a companion lioness for many years, he said when contacted yesterday.

Ghazale said he had made a surprise visit to Malacca Zoo to get a first-hand look following allegations on social media about the scrawny lion and skinny tigers there.

“I found the tigers healthy and responding well to the handler. Saleng is also in the pink of health but needs more rest due to his advanced age,” he said.

He said big cats were mostly inactive for about 20 hours in a day even in their natural habitat.

They are nocturnal animals, so they are mostly active at night. Some zoo visitors may think that they are listless and unhealthy because they see them only during the day, he said.

“Lions can live up to 14 years in the wild, and Saleng has surpassed even his “twilight years” due to meticulous care by the zoologists who keep a close watch on him.

“It’s appropriate for Saleng to be retired, and we will help the zoo management apply for a young pair of lions,” he said, adding that the matter will be discussed with the National Parks and Wildlife Department (Perhilitian).

He said Saleng could be kept in an another enclosure within the zoo compound and that it would not be put to sleep.

Ghazale said he also saw that the zoo management was providing proper nutrition to the tigers and Saleng.

However, he advised the management to improve the facilities there.

The Malacca Zoo was privatised in 2013 and is managed by a consortium, with KAJ Development Sdn Bhd (KAJD) as the anchor company.

KAJD CEO Datuk Michelle Ong was disappointed over the allegations.

She said the person who had made them doesn’t know anything about wild animals.

She said the management allocated about RM1.2mil a year for quality feed for the tigers and Saleng.

When The Star visited the zoo yesterday, Saleng was snoozing on a man-made boulder for many hours. He looked healthy but only woke up for his meal before returning to the spot.

The tigers, which were seen moving about, went into the shade for naps when the weather turned hotter.

They looked brawny and not at all underfed as alleged. 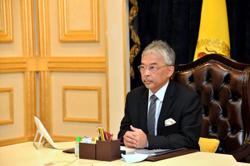