SERDANG: Eight people were injured in an explosion at the front porch of a nightspot in IOI Boulevard here.

It is learnt that patrons of the establishment were watching a Euro 2016 football match when the explosion occurred.

Puchong Fire and Rescue Department chief of operations Mohd Hisam Mat Yasih said a distress call was received at about 3am.

DCP Rahim confirmed the explosion was caused by a hand grenade.

A security guard working at the area said he saw smoke billowing from the nightspot after the explosion.

He said he saw three patrons injured by shards of broken glass.

A staff member of the nightspot said there were more than 20 patrons at the establishment, which was screening the Round of 16 match between Spain and Italy. 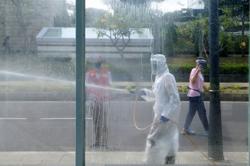