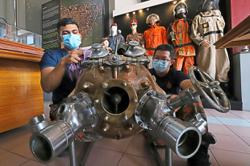 He said firemen responded to as many as 93 bush fires and battled blazes in 18 forests yesterday, while also being called in to douse 15 house fires and three open-burning cases.

However, cases have halved from the 276 fires that were ignited by the heatwave during equinox day on March 21, he said.

Terengganu, which recorded a temperature of 33°C yesterday, had the most number of bush fires with 26 cases. Pahang and Kelantan reported 15 and 11 cases respectively.

There were seven forest fires in Kelantan yesterday, said Soiman, adding that those fires have already been put out.

Selangor recorded four forest fires, the biggest of which is occurring in the South Kuala Langat forest reserve where about 13.8ha of peat soil are burning.

Despite the hot weather being a crucial factor in the many number of fires in nature, Soiman believed that people had a hand in most of the cases, too.

“Fires don’t automatically happen. It’s due to humans, too, maybe someone threw a cigarette butt or was doing open burning.

“A lot of things can cause fires, especially now because of the weather.

“If anyone sees a fire, please alert us immediately so we can take quick action. Or else, a small fire could spread and become a big problem,” he said.

The Air Pollutant Index readings as at 5pm yesterday showed good-to-moderate air quality nationwide, with the exception of Kuala Lumpur, which dipped to unhealthy levels with a reading of 113.