PETALING JAYA: The healthy steamed fish dishes that Malaysians enjoy will likely be pricier soon in view of the RM20mil losses suffered by Malaysia’s marine fish farms industry due to rising temperatures.

“Groupers, snappers and barramundi are dying in cages due to the red tide or the growth of algae, which competes with the fish for oxygen,” he said.

“Just last month, 100 tonnes of fish worth RM4mil that were destined for both local and overseas markets were wiped out in fish farms in Pulau Kukup in Johor.”

Mohamed Razali said the hot weather had encouraged algae to bloom in the shallow water, pushing up fish mortality.

Most of the 2,000 fish farms in the country operate in shallow water and protected bays, using about 100,000 wooden cages.

Mohamed Razali said export earnings from grouper and snapper, which are also sold to restaurants in Hong Kong, China and Singapore, amounted to RM400mil annually.

To escape the red tide, fishermen who could afford it were investing on high-density polyethylene cages so that they could relocate their farms to deeper waters.

These cages, which are also used for salmon farming in Norway, can withstand rough seas and weather but cost up to RM10,000 each.

Perak Animal Husbandry Association president Tan Kuang Liang, whose members include 128 pig farmers, said the lack of water due to the hot spell was a major concern.

Pigs needed to be hosed down daily to keep them cool, he said, fearing that a prolonged water shortage may increase mortality.

“The price of pork is stable now but any impact on the market will be felt in six to eight months,” he said, adding that the hot spell was “unprecedented”, leading to reduced appetite and birth rates among the animals.

Farmers had to spend more on supplements and vitamins for their livestock, he said, adding that the dry weather which led to grass drying up was another headache.

Samad, who operates a dairy farm with 300 heads of cattle in Kota Kemuning, said milk production was down by 20% to 30%.

“Farmers have to absorb these losses. Personally, I have had to spend another RM5,000 or RM6,000 a month on supplements for my cows,” he said.

Federation of Livestock Farmers’ Associa­tion of Malaysia president Jeffrey Ng said poultry farmers who breed in open houses or free range were worse off as unlike closed door farming, there was no way to control the temperature.

Sabah parents take kids out of school early due to haze 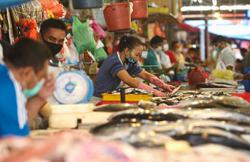 No shortage of fish in Klang Valley, say restaurant owners 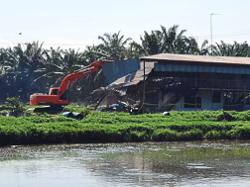