Hotspots bring about haze to Sabah’s western side

KOTA KINABALU: Five hotspots over Sabah triggered by the El-Nino phenomena have brought in haze to the west coast and interiors of the state.

However, the Air Pollutant Index (API) remained moderate in Kota Kinabalu and Keningau yesterday as firemen continued to put out bush fires in several areas across the state.

Sabah Meteorological Depart­ment acting director Lim Ze Hui said the five hotspots included three in Keningau and one each in Beaufort and Tongod near Kinabatangan.

We expect the amount of rainfall that was below normal to continue until the end of April, he said amid reports that firemen were battling at least 20 bush fires a day currently.

Lim also said they expected the haze to continue until the dry season ends, though it might see some improvements based on wind conditions.

Large tracks of secondary jungles, orchards, small oil palm and rubber plantations have been destroyed by fires while water shortages were also reported in more than a hundred villages here.

The visibility dropped to 7km for Kota Kinabalu yesterday and 6km in Keningau.

Meanwhile, State Fire and Rescue Department director Nordin Pauzi urged the people to refrain from doing anything that could trigger a fire.

He said the number of fires and emergency calls relating to the El-Nino effect had increased over the past few months.

With every fire, crops and property, including national heritage such as forests and so on, would be destroyed, he said. 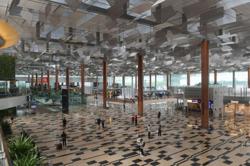