Papagomo: Any man would have done the same

PETALING JAYA: Papagomo has defended his assault of a Pakistani foreign worker, saying that any man would have done the same thing in his position.

“Anyone who is a brother, husband or father would have done the same thing as me. Sexual harassment is not acceptable at all, whether in Malaysia or anywhere else in the world,” he said in a Facebook post on Thursday.

Papagomo, whose real name is Wan Mohd Azri Wan Deris, is seen slapping, punching and kicking a Pakistani worker in a four-minute video that has gone viral.

He said that he assaulted the worker because he sexually harassed two of his younger sisters and two of their friends.

He had uploaded the video of the assault which occurred on Jan 29 on his Facebook page Sir Azri.

“Thank you for understanding that the issue has nothing to do with politics, but something every Malaysian regardless of their race and religion must be aware of,” he said.

He added that he uploaded the video on his Facebook page to explain what really happened as it had gone viral. 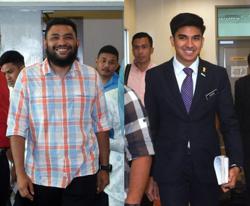