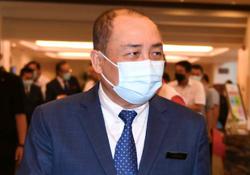 A cut above: The signage at the Mount Kinabalu summit mentioning Gunting and Low before it was taken off —via Google.

KOTA KINABALU: Some of Sabah’s earliest men to climb Mount Kinabalu in the 1800s will be honoured with signboards along the recently opened trail.

Gunting Lagadan of Bundu Tuhan and Lemaing of Kg Kiau, who were from the Dusun tribe, will have their names etched on signboards near the summit as a mark of their contribution.

Sabah Parks director Dr Jamili Nais said it was recently bombarded with questions from the public over the removal of the old Gunting Lagadan signboard at the summit.

“There are too many huge signboards at the summit and the space there is limited. But this removal is temporary and it will be replaced,” he said. The signboar would be replaced together with Lemaing soon, Dr Jamili added.

“As locals, we, too, want the world to know who were the earliest known people to scale Mount Kinabalu,” he said.

In 1851, Gunting and Lemaing were the first Dusuns to bring Sir Hugh Low, the then Colonial Secretary for the British crown colony of Labuan to the peak.

Low, who was credited as the first man to climb the mountain, took nine days to reach the summit plateau. He had travelled in a group of 42 people.

During that expedition, Low and John Whitehead, a zoologist who discovered two of Kinabalu's spectacular birds, Whitehead's Trogon and Whitehead's Broadbill, both started their historic ascent from Kg Kiau, situated on the north of Mount Kinabalu.

Although Low reached the summit plateau, he did not reach the peak that now bears his name.

Based on official records, Whitehead was the first person who reached the summit later in 1888.

However, according to many locals, Gunting, who was reputed to possess remarkable strength, was actually the first person to reach the peak and the first to carve out a trail for trekkers.