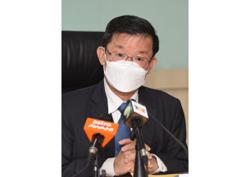 GEORGE TOWN: The possibility of trams plying the streets here again is nearing reality as a consortium has won the bid to carry out the RM27bil Penang Transport Master Plan.

Trams, which were a feature in pre-Independence Penang, are among proposals under the PTMP, which includes light rail transit (LRT) lines and a 20km pan-island expressway linking Bayan Lepas and Tanjung Bungah.

His announcement confirmed a StarBiz report yesterday, which quoted sources as saying that Gamuda had been appointed as the PDP and that it had formed a company with two local firms to implement the PTMP project.

Lim said the critical components were the LRT, trams and roads. “The LRT is not just on the island but on the mainland as well. It must be carried out outside the heritage zone. Within the heritage zone, we have to go back to the tram service. Reviving this system will make Penang unique and romantic,” he told a press conference at his office in Komtar before handing the letter of award to SRS Consortium chief executive officer Datuk Lin Yun Ling.

Lim said the state executive council appointed SRS Consortium as the PDP on Wednesday based on its extensive expertise on mass rail transit and related public transport infrastructure as well as large-scale township development.

He said the consortium would be working closely with the state government in the next six months to ascertain the detailed execution masterplan, engineering designs, gather public feedback and obtain all state and federal approvals for each PTMP component.

Besides the LRT, tram and pan-island expressway, it had been reported that the other components were a catamaran system and a RM100mil highway interchange upgrading project.

“Hopefully, we will also be getting cable cars and water taxis,” Lim said.

He said once the approvals and planning for the various PTMP work packages were in place, the consortium would call for open tenders and invite tender submissions.

On which component of the PTMP would begin first, Lim said it would depend on which licence or permit could be secured.

He said the first PTMP project was expected to be rolled out by 2017 and all its components completed by 2030.

Lim said the consortium would employ strict safety and environment protection standards and measures to minimise the PTMP’s environmental and social impact.

“The state government emphasises that all costs and expenses incurred will be fully borne by the PDP in the event that no approvals for each PTMP component is obtained from the Federal Government,” he added.

On funding from the state government, he said the issue would only be addressed once the consortium secured all licencing approvals from the Federal Government.

“We will be working on a financial model based on a land swap. But it is still too premature to talk about this,” Lim added.

In the StarBiz report quoting sources yesterday, it was stated that the old Prangin market, popularly known as Sia Boey (Town’s End), had been designated by the state government as the site for the central LRT station.

From Sia Boey, the initial plan is to have a 17.5km LRT line running from inner George Town to Bayan Lepas. There will be two additional lines, running from Sia Boey to Tanjung Tokong via Kelawei Road, and to Paya Terubong via Datuk Keramat and Air Itam.