KUNDASANG: Amid misty and windy conditions with temperatures around 10° Centigrade, a group of climbers successful made the test ascend to Mount Kinabalu.

This meant the first hurdle towards the reopening of the earthquake-hit mountain by Sept 1 is successful. The climbers used the rehabilitated 6km trail from Timpohon Gate to Laban Rata.

A group of 88 climbers from Sabah Parks, families of guides and also the media scaled up to the Laban Rata rest house at the 3,272m point of the 4,095m of the mountain yesterday. Most parts of the trail were intact though slippery due to rains over the past few days.

This was the first group on the expedition trial up the mountain after its closure following the 6 Richter scale earthquake that killed 18 people, including guides and trekkers.

The trial climb, which was flagged off by state Tourism, Culture and Environment Minister Datuk Masidi Manjun at 8.15am, was carried out under strict guidelines that all climbers were to make it back to Timpohon Gate by 2pm for safety reasons.

Most climbers found the climb smooth with the first 1,000m trail undisturbed by the quake. 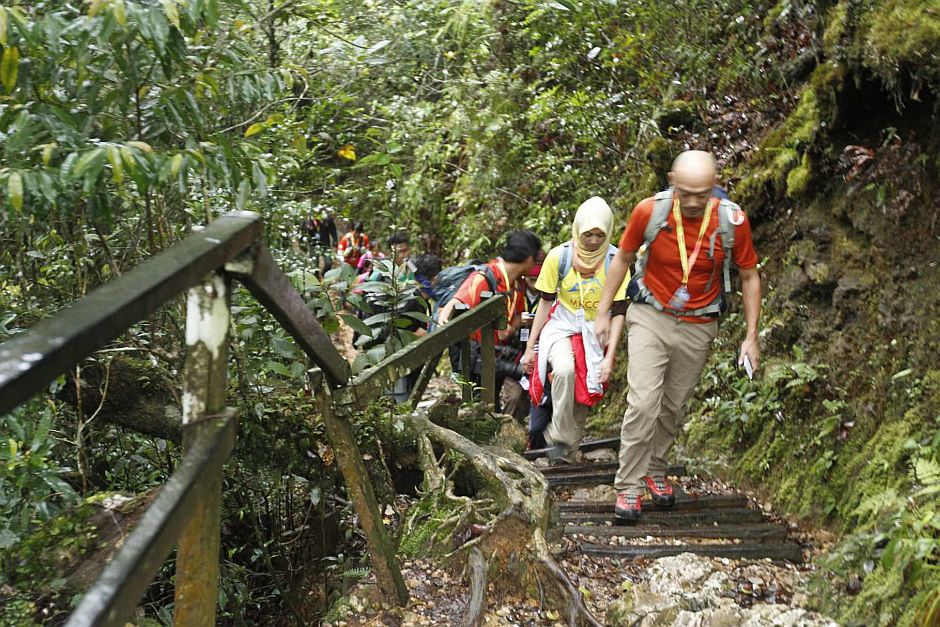 Testing ground: The climbers trekking up Mount Kinabalu during the first trial after the June 5 quake.

Signs of it only emerged from 1,500m onwards. Upon reaching the 1.5km mark, a section of the route had fallen off the cliff and a new path had been cut out.

Damaged paths caused by falling trees were cleared off to allow trekkers to move in pairs. However, not all managed to reach Laban Rata in the four hours but those who reached said that the trail was safe and secure for climbers.

But, now the next hurdle was to get the mountain re-opened by the deadline. This will depend on how fast Sabah Parks can carve out a new trail from Laban Rata to the summit.

Masidi said that his ministry and Sabah Parks would decide on a suitable date to commence repair works on the damaged trail after holding a technical meeting on Aug 11.

“They will put in place a timeframe for repair works to be completed.”

However, it is becoming clearer that Sabah Parks will not allow overnight stays at Laban Rata and also will limit the number of climbers in the early stages.

Masidi said they were also getting feedbacks from experts from Japan and China on the best methods and what was required to fix the trail, particularly between the 6km and 6.8km stretch, which has been blocked by boulders and rocks that cannot be moved.