Big plus for national identity

PETALING JAYA: An overwhelming seven out of 10 people in The Star’s moderation survey identify themselves as Malaysian first.

However, more than half of the 5,070 people taking part think that they are being identified by others as a person from their racial group.

In the first such survey ever carried out by the newspaper, 69% think of themselves as Malaysian first, followed by another 21% identifying themselves as belonging to a racial group.

Minister in the Prime Minister’s Department Tan Sri Joseph Kurup said he was encouraged by the results of the survey.

“I believe this stand – of seeing oneself as Malaysian first – should be promoted as a way forward to foster greater unity and to heal tensions.

“Seeing ourselves as Malay­sians first is not a betrayal of our ethnicity or religion. Being Malaysian is our collective identity,” said Kurup, who is the minister in charge of unity. 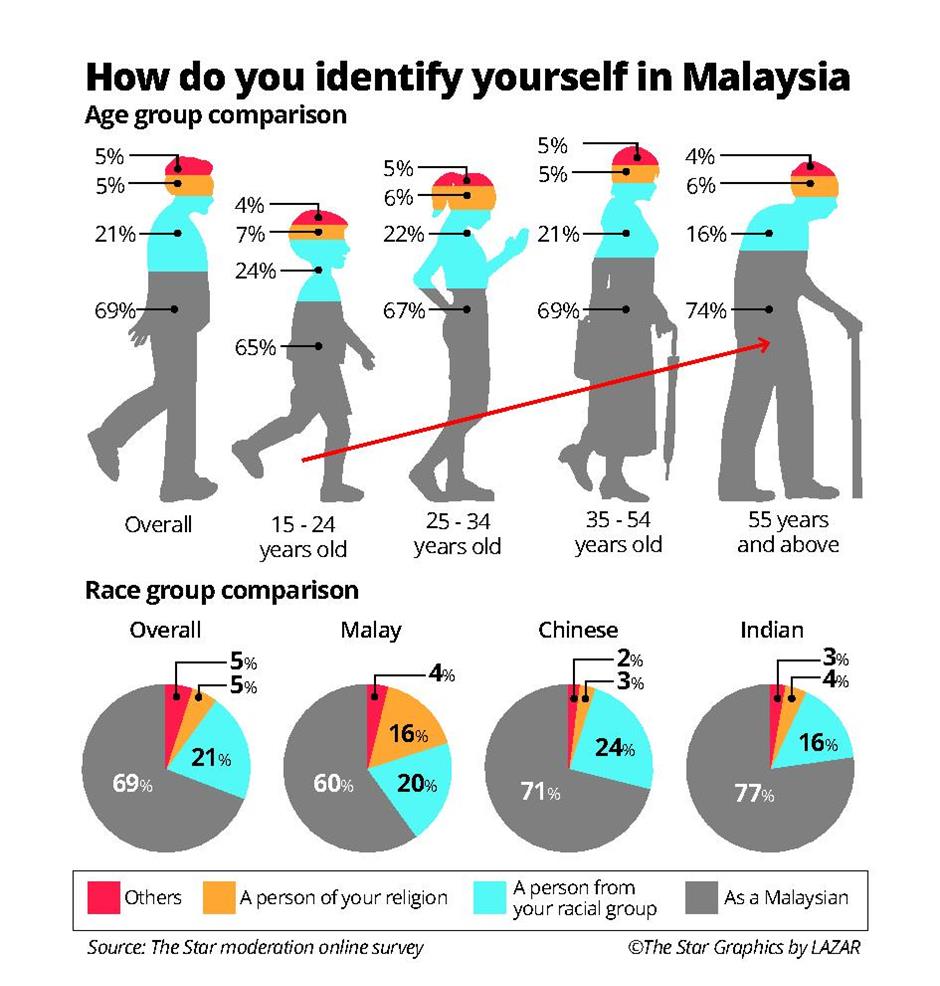 Of late, he said there had been too much unhealthy rhetoric on race and religions, adding that this must stop.

In the survey, 5% perceive themselves as a person of their religion while the remaining did not reply.

When it comes to what they think others perceive them to be, 57% state that they are identified as a person from their racial group.

Kurup said it was a worrying and unpleasant reality that 57% of those surveyed thought that they were being identified by others by their race.

This, he said, could threaten long-established traditions of communal harmony in Malaysia.

“We can safely presume that one of the root causes for such sentiments among our younger generation is due to political contestation that drives politicians to exploit racial and religious platforms,” he said.

Ideas such as racial superiority, he pointed out, reinforced sentiments of “us against them”.

“This survey highlights the great importance of the need for a spirit of national unity,” he said.

While a resounding 92% feel that the topic of moderation is important, only 49% agree or somewhat agree that most Malaysians practised this value.

Three-quarters of the respondents also think that Malaysia is becoming less moderate.

The survey showed that while over half (55%) think that the state of ethnic relations in Malaysia is not good, 73% perceive this to be actually worsening.

On the bright side, 61% say they have more than five friends from other cultural, racial or religious backgrounds and over 90% indicate interest in meeting such people.

Some 72% always or sometimes feel uncomfortable discussing issues of racism, discrimination and oppression.

The economy and cost of living are still the most critical issues concerning them (65%), followed by race and religious issues (49%) and crime (47%).

To stop extremism or promote moderation, 86% say they will accept differences and have mutual respect while 72% prefer to encourage open and rational discussions. Some 66% say they will set an example in speech, behaviour and actions.